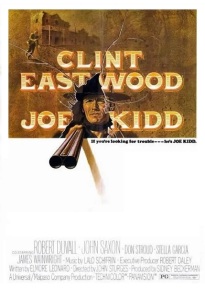 A corrupt and ruthless land baron (Robert Duvall, Tender Mercies) hires a gunslinger (Clint Eastwood, Dirty Harry) to hunt down a Mexican bandido (John Saxon, A Nightmare on Elm Street), who is fighting to keep his land.

“I gotta dollar here says I can break your neck…”

Sandwiched between two of Clint Eastwood’s most popular movies, Dirty Harry and High Plains Drifter, Joe Kidd feels like something “lost in the shuffle.” Even I, who prides himself on being well-versed in all things Eastwood, had never seen this western before. Now that I’ve watched the movie I fully understand its semi-obscurity.

In the early 1970s, Eastwood was on a roll. Kelly’s Heroes, The Beguiled, Play Misty for Me, Dirty Harry, all great movies. Nearly fifty years later, Joe Kidd sticks out like a sore thumb. The movie feels like a lazy attempt to exploit Eastwood’s popularity — a half-baked revisionist western that lacks a punch and a heart.

It’s disappointing to see that so much talent was unable to create something of greater value. The film was directed by veteran John Sturges (Bad Day at Black Rock and The Magnificent Seven). The script was written by iconic crime writer Elmore Leonard (Get Shorty and Out of Sight). The music was composed by Lalo Schifrin (Cool Hand Luke and The Amityville Horror). The film was shot by ace cameraman Bruce Surtees (Dirty Harry and Lenny). I expected more from this extraordinary group of men.

The film’s main problem is its underwritten title character. Eastwood once again plays a monosyllabic gunfighter, but this time around the character he plays is so ill-defined that it is never clear why he is doing what he does.

“Joe Kidd” is likable enough — he is an irreverent and skilled gunfighter — but he suffers from an acute case of “more of the same.” Because of its cardboard title character, Joe Kidd looks a little better if you see it as a direct sequel to Don Siegel’s Two Mules for Sister Sara. Eastwood plays essentially the same character — I noticed that the actor wears the same funky-looking holster in both movies!

The film’s finest moments are provided by the supporting characters, played by an array of wonderful actors. The underrated John Saxon is excellent as the proud Mexican revolutionary Luis Chama, who is fighting racial economic inequality. Saxon does a good job selling Chama as a morally complex “good guy.”

This is one of Eastwood’s weakest westerns. Joe Kidd seems like something Eastwood did to keep himself busy. However, having said all this, the movie has some goodies — I liked the supporting cast and the gorgeous widescreen cinematography. Lower your expectations and you might enjoy this western. Color, 88 minutes, Rated PG.