A radio DJ, Dave Garver (Clint Eastwood, Hang ‘Em High), has a one-night stand with a woman (Jessica Walter, The Flamingo Kid) who happens to be an ardent fan of his radio show. After he realizes the woman is stalking him, Dave tries to get rid of her, but she refuses to go away and the casual tryst becomes a living nightmare.

“… you ever find yourself being completely smothered by somebody?”

Although the films take place in different centuries, Play Misty for Me is thematically similar to Clint Eastwood’s previous movie, the Gothic western The Beguiled. One wonders what was going through Eastwood’s mind as both movies attempt to dissect the actor’s popular tough-guy image. 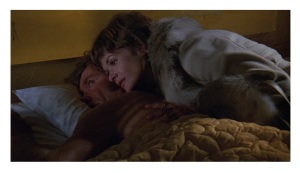 Play Misty for Me marked Eastwood’s directorial debut, and a lot can be inferred from the fact that he chose this introspective thriller as his first try behind the camera. Play Misty for Me is moody, reflective and thoughtful — Eastwood seems to be saying, “There is a different side to me that I want you to see.”

It’s impossible to look at the movie today and not think about Adrian Lyne’s 1987 smash hit Fatal Attraction. Like Lyne’s thriller, Play Misty for Me explores pathological and ultimately deadly romantic infatuation. But I much prefer Eastwood’s movie: while Fatal Attraction is cliched, Play Misty for Me is honest and perceptive — Eastwood uses the mechanics of the thriller genre to explore gender roles in modern society.

Play Misty for Me perversely demolishes its anti-hero, whose male-ego is off the charts. Eastwood’s character is a callous womanizer who only cares about himself. But Eastwood embraces his character’s unlikability and there isn’t a single moment where he tries to manipulate you into liking his character.

As the story progresses, Eastwood’s DJ is exposed as a powerless man — he acts as if he is at the top of the food chain, yet he is constantly at the mercy of women’s whims. It isn’t just that his psychotic lover has turned his world upside down, all the women in his life help crack open the ego shell. The DJ’s ex-flame dictates the terms of their romantic relationship. He desperately applies for a new job, only to be rejected by a female executive. Even the maid bosses the poor guy around — when he asks her to do something, the maid mocks him and flat-out refuses to follow his instructions! The interesting thing is that his new-found impotence does humble him. 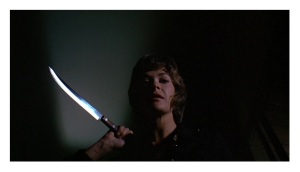 Because the film uses many aspects of Eastwood’s personal life — his love for jazz, his celebrity-status, his beloved Carmel, California — I could not help but wonder how much Play Misty for Me is intentional self-analysis and how much is accidental projection. Eastwood went as far as to cast his favorite director, Don Siegel, in the small role of “Murph The Bartender.” It’s even more interesting when you take into consideration that Eastwood has had a long and troubled history with women. I don’t know what to make of it, but this is all very interesting and fascinating to watch.

Eastwood is also surprisingly magnanimous: he allows co-star Jessica Walter to steal the film. All characters react to Walter’s actions, a clearly unstable woman who won’t take no for an answer. The lady’s mental disintegration is vividly portrayed by the talented Walter. And she remains oddly sympathetic because Eastwood makes it perfectly clear that his character is using the woman — the DJ keeps having sex with her even after he realizes that she’s needy and unbalanced.

Clint Eastwood’s Play Misty for Me is every bit as good, if not better, than his award-winning films. The writing is sharp, the acting is uniformly excellent and Bruce Surtees’s camera work is stunning. It’s a thinking person’s psychological thriller that fans of the genre don’t want to miss. It’s also a great example of 1970s noir (aka neo-noir). Above all, it is Eastwood at his most honest — his willingness to deconstruct his screen persona is refreshing to say the least. Color, 104 minutes, Rated R.