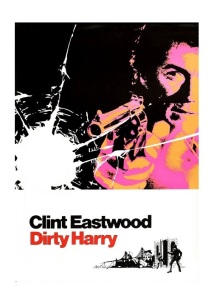 “Dirty Harry” Callahan (Clint Eastwood, Unforgiven) is a San Francisco cop assigned to capture a vicious serial killer (Andrew Robinson, Charley Varrick) nicknamed “The Scorpio Killer.” When conventional methods prove to be ineffective, Callahan decides to the ignore the rules and go after the psychopath using his own “techniques.”

“I’m all broken up about that man’s rights.”

This legendary action thriller holds up well after all these years. Dirty Harry is a suspenseful, diabolically funny thriller, effectively pandering to our romanticized view of rugged individualism. It’s also a film that has been marred by controversy — Dirty Harry has lost none of its ability to anger various sectors of the population.

Dirty Harry has always ignited endless conversations about policing and crime. The film has been accused by its detractors of pushing the idea that the solution to high crime is rogue cops (director Siegel and star Clint Eastwood have vehemently denied the charges). The film has also been labeled racist (mostly because of the now famous bank robbery scenes where Callahan confronts a group of African-American criminals).

Personally, I’ve never taken the movie seriously. Dirty Harry is way too far-fetched, too cartoonish, for me to get worked up about the film’s supposedly fascist ideas. It’s essentially a movie fantasy that appeals to our most primitive, immature instincts — Dirty Harry is a two-hour thrill ride where good prevails over evil.

Dirty Harry is brilliantly put together. The film’s pace is fantastic, and there are many eye-popping moments along the way (courtesy of cinematographer Bruce Surtees, Lenny). Director Siegel spent most of his career making gritty crime films (e.g. Madigan, Charley Varrick, etc.), so it’s no surprise that he’s able to infuse the story with contagious energy. Siegel also gets superb performances out of the great cast.

The sturdy and jazzy score by award-winning composer Lalo Schifrin (Cool Hand Luke and The Amityville Horror) is irresistible. Yes, it screams “we-are-in-the-1970s,” but it really elevates a couple of scenes to a higher level of excitement. The movie wouldn’t have worked as well as it did without Schifrin’s contributions.

Although it’s not everyone’s cup of tea, Dirty Harry can be a lot of fun if you don’t think about it too much. If you’re able to put its morally dubious message aside, you’ll enjoy the film’s many exciting action set-pieces. P.S. Director Don Siegel has a cameo as a pedestrian. Color, 102 minutes, Rated R.