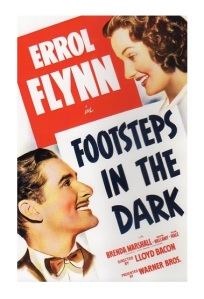 Unbeknownst to both his wife (Brenda Marshall, The Sea Hawk) and mother-in-law (Lucile Watson, Watch on the Rhine), Francis Warren (Errol Flynn, The Sisters) leads a double life: he’s a financial consultant who writes popular mystery novels under a pseudonym. When one of his business clients dies under mysterious circumstances, Warren adds another identity to his resume: amateur sleuth.

Directed by Lloyd Bacon (Marked Woman) from a screenplay by Lester Cole and John Wexley, Footsteps in the Dark was based on two stage plays: Footsteps in the Dark, by Ladislas Fodor, and Blondie White, by Bernard Merivale and Jeffrey Dell. The project went through many hands until it landed on Errol Flynn’s lap, who was eager to take a break from period dramas and action movies.

Flynn is hilarious as he tries to keep his multiple identities from his family. The mystery is rather easy to guess, but Flynn’s charm and charisma make it irresistible. Flynn proves that he had perfect comic timing — it’s really a pity that he didn’t make more comedies like this one. The actor makes the most of a rare chance to prove that there was a whole lot more behind his matinée idol screen persona. 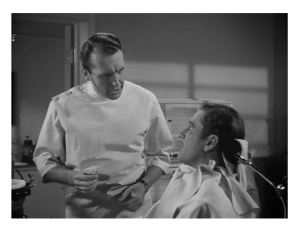 Footsteps in the Dark was one of Flynn’s less financially successful films. I’m guessing that the public wasn’t eager to see him in a comedy. That’s a pity because he is really good. The ending seems to leave the door open for a sequel, and I’m a bit sad that they didn’t make more films with this character. B&W, 96 minutes, Not Rated.