Here is one of those anomalies, something you don’t see everyday in Tinseltown: a remake that pulverizes the original. Director Howard Hawks (Bringing Up Baby) took the 1931 film The Front Page, which was an adaptation of the stage hit by Ben Hecht and Charles MacArthur, changed the gender of one of the main characters, and abracadabra, one of best romantic comedies of Hollywood’s Golden Era was born.

His Girl Friday‘s overlapping was ahead of its time. Characters talk super-fast, often interrupting each other, making some of what they say unintelligible. I had to replay certain scenes three or four times so I could hear what everybody was saying. Normally, this kind of thing is the kiss of death — last thing a movie wants to do is confuse the viewer — but I found myself bewitched by all that jumbled talk.

Charles Lederer’s (The Thing from Another World) script is full of great lines: “The guy who looks like the actor Ralph Bellamy” and “The last man who said that to me was Archie Leach (Cary Grant’s real name!), just a week before he cut his throat.” Hawks encouraged spontaneity and ad-libbing so a lot of what you see was improvised. 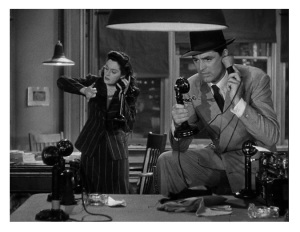 Also, I was very much taken aback by the His Girl Friday‘s forward-thinking attitude regarding gender roles. Russell’s Hildy is every bit the equal of the men; she is actually shown to be smarter than her male counterparts. And unlike George Stevens’s 1942 classic Woman of the Year, in which the main female character is literally sent back to the kitchen, Hildy’s talent is celebrated.

Cary Grant and Rosalind Russell are superb — I just don’t know how they managed to talk so fast! They make an explosive screen duo. Ralph Bellamy has the least showy role, but he is very funny too. The great supporting cast includes Gene Lockhart (Algiers), and Porter Hall (Double Indemnity).

His Girl Friday is a lot of fun. However, you may need to keep the DVD player remote control close by so you don’t miss any dialogue. Remake in 1988 as Switching Channels, with Burt Reynolds, and Kathleen Turner. B&W, 92 minutes, Not Rated.