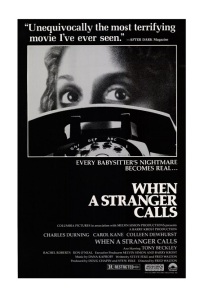 A babysitter (Carol Kane, The World’s Greatest Lover) keeps getting creepy phone calls from a seemingly disturbed man (Tony Beckley, Revenge of the Pink Panther) while on a job. And that’s just the beginning of the story…

Although it might be considered passé by today’s standards, When a Stranger Calls was one of the most talked-about thrillers of its generation. I clearly remember watching it as a kid and thinking that the first twenty minutes weren’t for the fainthearted. Nearly four decades later, this eerie low-budget movie still gives me the willies.

This film and John Carpenter’s classic slasher Halloween (1978) turned babysitting into one of the most dangerous jobs in America. If Steven Spielberg’s horror masterpiece Jaws (1975) had announced that no one was safe in the water, When a Stranger Calls clearly suggested that your own home wasn’t the safest place to be after all.

Based on his short film The Sitter (1977), director Fred Walton (April’s Fool Day) builds suspense with the clinical precision of a scientist. As I mentioned before, the first twenty minutes are a textbook lesson in how to create an almost unbearable atmosphere of terror. In fact, the first section of the film is so strong — it’s one of the most terrifying openings in movie history — that what comes afterwards is a bit of a letdown.

That being said, the movie is constructed in an interesting manner. The story is divided into three sections. The first segment deals with the babysitter being harassed by the caller. The mid-section revolves around the psychopath and his relationship with a barfly. The last part of the movie is about the babysitter confronting the killer.

Another unusual thing about this thriller is the high caliber of the performances. Carol Kane conveys a wide range of emotions as the frightened babysitter. British actor Tony Beckley — unfortunately, he died not long after completing the film — dominates the middle part of the movie with a fascinating portrait of a psychopath.

Charles Durning (Tootsie and The Best Little Whorehouse in Texas) plays the detective obsessed with capturing the killer, and his commanding presence is the element that ties all three sections of the movie together. Durning’s increasingly frantic determination to capture the bad guy adds a fascinating touch to the narrative.

Despite its many, many imitators, Fred Walton’s When a Stranger Calls remains an effective exercise in suspense. The film is technically solid, and the cast is excellent.  It is one of those films that lives up to its reputation as being one of the creepiest movies of the 1970s. The movie was remade in 2006. Color, 97 minutes, Rated R.

Followed by When a Stranger Calls Back (1993)