In 1935, a shady businessman (Richard Widmark, Kiss of Death) is brutally murdered aboard the legendary Venice-Simplon-Orient-Express luxury train. Famous Belgian detective Hercule Poirot (Albert Finney, Tom Jones), who happens to be a passenger on the train, quickly starts working on solving the crime.

“We now come to my own reconstruction of the night of the murder.”

Agatha Christie is one of the most widely read authors in the world (only the Bible and Shakespeare sell more copies than her published books), and continues to gain thousands of new fans each year. Combining easygoing charm with sly red herrings, Christie was able to create intricate mysteries full of offbeat characters. 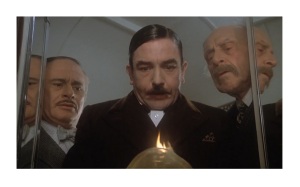 Of all the fictional characters that Christie created (including the resourceful senior citizen Miss Marple), no other is more enduring than the vain, but brilliant Belgian sleuth Hercule Poirot. Rivaled only by Sherlock Holmes in sheer genius for solving crimes, Poirot is one of the most beloved characters in the whodunit genre.

After many years of waiting for a proper Poirot movie (the character made an inauspicious film debut with the silly 1931 B-movie Alibi), fans rejoiced when Christie was finally persuaded to sell the movie rights to her well-regarded and still-popular 1934 book Murder on the Orient Express. Christie remained skeptical, but, as it turned out, Murder on the Orient Express is a near-perfect whodunit that was well-received by both moviegoers (it was a huge box-office hit) and film critics.

Stylishly directed by Sidney Lumet (Dog Day Afternoon) from a screenplay by Paul Dehn (Franco Zeffirelli’s The Taming of the Shrew), Murder on the Orient Express may look a little quaint by today’s standards, but this uber-elegant production sets the standard against which all later Poirot movies should be judged. The film is admittedly long, but the lengthy running time works to the film’s advantage, helping flesh out some of the narrative’s more interesting characters and plot threads.

Murder on the Orient Express is fancy to a ridiculous degree, but that’s precisely the point. “Nothing is meant to be realistically portrayed,” director Lumet would later explain. This is, above all, an exercise in nostalgia. One has to remember that nostalgia is often described as “a longing for a past that never existed.” The smoky cinematography, the over-the-top costumes, the kitschy sets, everything is meant to recreate a past that never was — it’s like a gorgeously misty journey into the past.

And then there’s the fabulous all-star cast. Albert Finney is particularly brilliant as the legendary Poirot. Finney’s Poirot isn’t exactly like Christie’s, but it’s a fascinating collection of mannerisms — no other actor has ever been able to capture Poirot’s eccentricities like Finney has done here. Finney’s final monologue (approx. 28 minutes) is an acting tour-de-force (I couldn’t take my eyes off him).

Ingrid Bergman’s (Casablanca) interrogation scene (approx. 4 minutes) is also stupendous. Director Lumet’s risky decision to leave the camera on Bergman’s face really pays off — the actress is able to project a potpourri of emotions in a single, uninterrupted take. This is what great acting is all about! I’m not surprised at all that she was later awarded the Best Supporting Actress Oscar for her brilliant performance.

Murder on the Orient Express is one of my favorite Agatha Christie movies. While it’s true that Albert Finney’s Poirot has divided fans (Christie’s Poirot isn’t as mannered as Finney’s), I think the actor made an honorable effort to breathe new life into the character. In fact, Finney is one of the reasons I enjoyed the movie so much. I also have to praise director Sidney Lumet’s directorial choices — Murder on the Orient Express is not only a sophisticated whodunit with a once-in-a-lifetime cast, but also an affectionate homage to the Golden Age of Hollywood. Color, 127 minutes, Rated PG.