Thief of Hearts is a super-slick, contemporary romantic drama that was considered risqué back in 1984. There is nothing here worth getting upset about. As a matter of fact, the film is a bit quaint compared to today’s “skin flicks” like Fifty Shades of Grey. 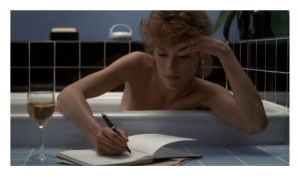 First-time director Douglas Day Stewart, who wrote the screenplay for An Officer and a Gentleman, tries his very best, and the film is certainly well-directed and acted, with good work by Steven Bauer and Barbara Williams in the leading roles.

Unfortunately, Thief of Hearts starts losing steam halfway through when the story enters soap opera territory. Despite some dated moments, and a third act that doesn’t ring true, the film is enjoyable for the most part. I’m sure fans of romantic melodramas will enjoy it, while more cynical viewers will probably find a lot to complain about.

The film’s commercial and critical failure seriously damaged the careers of many of the artists involved in the production of the film. Cuban actor Bauer first gained popularity next to Al Pacino in Brian De Palma’s Scarface. Thief of Hearts was his first starring role in a major Hollywood film, but the experience did nothing to advance his career.

Williams didn’t fare any better, and now she is seen mostly sporadically in TV movies. Director Stewart suffered the most, never again achieving the success of his earlier back-to-back mega-hits The Blue Lagoon and An Officer and a Gentleman. This is all too bad since Thief of Hearts is well-crafted and entertaining.