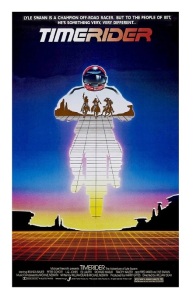 Lyle Swann (Fred Ward, Remo Williams) is a champion road racer who is accidentally sent 100 years back into the past by a time-travel machine.

“If General Lee had had that machine, we’d have won the war.”

With the creation of the VHS format, many films that were ignored during their original theatrical run found a new audience on Home Video. Timerider: The Adventures of Lyle Swann certainly falls under this category — a B-movie that failed to attract an audience during its first theatrical run, but has gained many fans over the years. 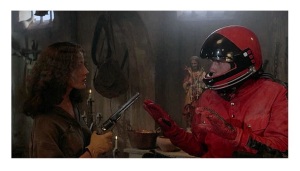 Directed by William Dear, written by Dear and Michael Nesmith, Timerider: The Adventures of Lyle Swann is the rare time travel movie that avoids most clichés associated with these types of movies — for once the hero never realizes the seriousness of his predicament. The film succeeds in giving an old hat a new look.

Using a talented cast (most of the now famous actors in the film were unknowns at the time the film was made), and shooting mostly on location, an unpretentious little fantasy movie becomes a zippy adventure tale with a sharp sense of humor. Though not at the level of a film like Robert Zemeckis’s blockbuster Back to the Future (1985), Timerider: The Adventures of Lyle Swann is a fun movie from beginning to end.

While not a perfect film, Timerider: The Adventures of Lyle Swann is a fun sci-fi & western hybrid that is destined to take many lovers of B-movies by surprise. The film has such an irresistibly tongue-in-cheek attitude that I’m sure most viewers will feel inclined to forgive the film’s few slow patches, and the rushed ending.

With little money and a lot of heart, the filmmakers succeeded in turning Timerider: The Adventures of Lyle Swann into a goofy, but entertaining movie. Those of you that haven’t seen the film should make an effort to check it one out — it’s a low-budget movie that brims with charm and vitality. Color, 94 minutes, Rated PG.