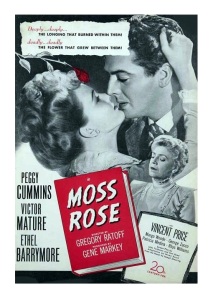 In Victorian England, a cockney chorus girl (Peggy Cummins, Gun Crazy) decides to investigate the murder of a fellow dancer. The young woman discovers that her friend’s aristocratic lover (Victor Mature, Samson and Delilah) is responsible for her death. But the dancer chooses to blackmail the aristocrat instead of going to the police.

Moss Rose is an engaging Gothic-mystery with a truly bizarre storyline of compulsion, toxic relationships and obsessive love. I’m confident that the film’s wacky premise and good performances will hook viewers from the very beginning. 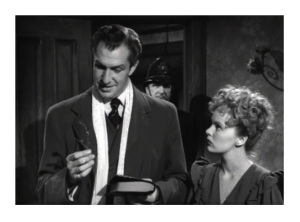 Scripted by Niven Busch (Duel in the Sun), Jules Furthman (To Have and Have Not and The Big Sleep) and Tom Reed (Night People), based on the 1934 best-selling novel by Joseph Shearing (aka Marjorie Bowen) of the same name. The book was allegedly based on the real-life murder of a prostitute in England in the 19th century.

The movie is similar to Hitchcock’s Suspicion (1941). But Moss Rose is more twisted than Hitchcock’s movie: the heroine falls for the killer and makes no apology for it. It’s fatal attraction, 1940s style. The murder investigation takes a backseat to the characters’ dark passions. The film is deeply preoccupied with the uncomfortable connection between love and ethics. I don’t want to spoil the surprises, so I’m just going to say that if you like stories about unusual relationships you will enjoy this moody thriller.

The film was directed by Gregory Ratoff (Intermezzo), a fine filmmaker who often played character parts in other directors’ movies (Ratoff is best remembered as cranky producer Max Fabian in Joseph L. Mankiewicz’s 1950 classic All About Eve).

Ratoff’s work is stylish. He never lets the visuals overshadow the performances, though. I particularly liked how all the main actors are playing against type. Beefcake Victor Mature is the Byronic anti-hero, mousy Peggy Cummins (I didn’t realize how much she looks like Sandy Dennis, Who’s Afraid of Virginia Woolf?) is the blackmailer with obsessive-compulsive disorder and Grand Dame of Theater Ethel Barrymore (None but the Lonely Heart) plays Mature’s passive-aggressive mother. 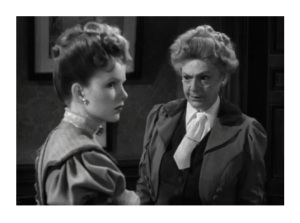 And who would have thought it? Vincent Price plays the most normal person in the movie! He is Inspector Clinner, a Columbo-like Scotland Yard detective who pretends to be clueless in order to confuse the bad guys. Clinner is also an amateur horticulturist, which comes in handy during the murder investigation.

Price’s role is small — he has four scenes — but he is great. His scenes with the great Barrymore are a pleasure to watch. There’s something going on between them, a kind of unique, stimulating and completely organic chemistry. I wish they had more scenes together. Anyhow, it was nice to see Price play the good guy for a change.

An interesting, stylish and highly entertaining murder-mystery, Moss Rose is also weird in a good way. The film failed to attract an audience (mainstream America has always had a problem embracing offbeat premises). But if you like movies like The Spiral Staircase (also with Barrymore), you’ll enjoy it. B&W, 82 minutes, Not Rated.

This is my contribution to The Vincent Price Blogathon, hosted by Realweegiemidget Reviews and Cinematic Catharsis. 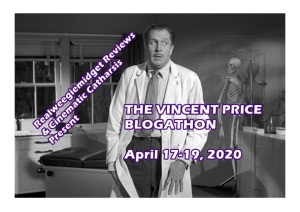