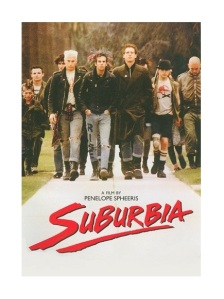 Tired of dealing with his alcoholic mom, a teenager runs away from home and joins a group of homless kids who are immersed in the punk culture.

“We’re talking about a bunch of sickos, mental rejects running wild in our streets”

I was a teenager when I watched Penelope Spheeris’s ‎punxploitation cult classic Suburbia for the first time, so its strong anti-establishment vibe appealed to me a great deal. Rewatching the movie as an adult made me realize that I had missed much of the nuance of this unquestionably odd Roger Coman production. 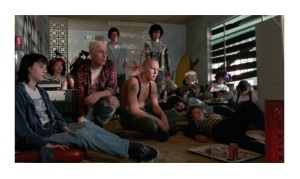 Soon after making a documentary about the punk rock scene in L.A., California, The Decline Of Western Civilization (1981), filmmaker Spheeris began working on Suburbia, a fictional movie where she intended to explore this sub-culture further. Spheeris initially had trouble getting the project off the ground.

Spheeris found a kindred spirit in producer Corman, a true maverick who operated on the outskirts of mainstream cinema. Corman, who was known for employing a large amount of women at a time when the industry was dominated by men, decided to take a chance on Spheeris. Corman pretty much left Spheeris to her own devices, and the end result is one of the most chilling depictions of youth alienation I’ve ever seen. 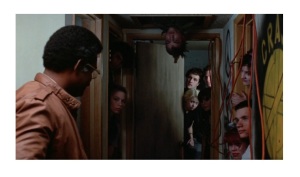 Despite showing genuine compassion for outcasts, Suburbia struck me as being brutally honest about the disadvantages of nonconformity. Outwardly, the movie is a frontal attack on economic complacency and traditional values. On further reflection, though, this is as hard on the homless kids as it is on mainstream society.

Even though it’s clear that director Spheeris’s sympathies lie with the kids, she never allows her personal feelings to sugarcoat the situations. Some runaway kids are trying to escape all kinds of abuse at home. Some kids are just plain sociopaths. There is also plenty of racism, homophobia, and misogyny among these misfits. 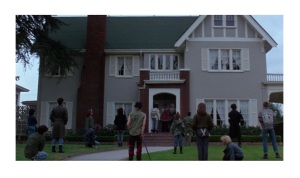 Moreover, Spheeris doesn’t shy away from presenting the chaos that ensue when young people decide to live together with no adult supervision, no rules. Rebellion is never romanticized. On the contrary, Suburbia shows us that life as a rebel might seem cool at first glance, but you can be sure that it isn’t a bed of roses.

Most of the homless kids were played by real street kids, so the acting in the movie isn’t all that good. But I think Spheeris was correct in thinking that in a movie like this one, authenticity was more important than acting ability. There is a sadness in their faces that’s unsettling because it’s so real. While most kids went back to their street lives, some of them, like Chris Pedersen (The Night of the Comet) and “Flea” (from the rock band Red Hot Chili Peppers), were able to continue their showbiz careers.

I’m a typical ’80s latchkey kid who grew up in one of those suburban neighborhoods you see in an old John Hughes movie. Maybe that’s why Suburbia has always held a fascination for me. It gives me a peek into a world I know nothing about. Although Suburbia can be hard to watch at times, it’s an undeniably powerful study of both youth alienation and the punk culture in the early ’80s. Color, 94 minutes, Rated R.

This is my contribution to The Corman-Verse Blogathon, hosted by RealWeegieMidget Reviews and Cinematic Catharsis. 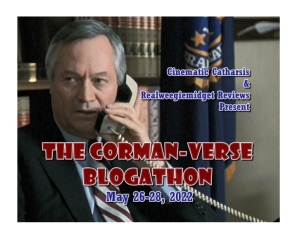