“You really hate me, don’t you? You’ve never forgiven me in all these years.”

What Ever Happened to Baby Jane? (1962) was a huge hit and success in the film industry always begets copycats. Although it was never intended to be more than a Baby Jane wannabe, Dead Ringer turned out really well. The story is bonkers and star Bette Davis’s double-service of smoked ham is delicious — the film is lots of fun!

Inspired by an obscure 1940s Mexican movie with Dolores del Río (The Fugitive), Dead Ringer was originally prepared by Warner Bros. for actress Lana Turner (The Bad and the Beautiful), who bailed out at the last moment. Davis agreed to make the movie after Warners offered her a beefy paycheck and promised to hire Davis’s friend, actor Paul Henreid (Casablanca and Now, Voyager), to direct the movie.

Film critics and historians have sarcastically placed these post-Baby Jane horror films under the banner “hagsploitation,” but the much-maligned sub-genre should be praised and not ridiculed. In an industry where ageism and misogyny are serious problems, it’s a good thing to see stories that revolve around women of a certain age.

If anything, Dead Ringer demonstrates how Davis was able to elevate a film by sheer force of will. Plot holes are plentiful so this is one of those movies that requires a fair amount of suspension of disbelief from viewers. Risk-takers won’t be disappointed — Davis’s charisma alone makes this exercise in Grand Guignol fun to watch.

Gallons of dark humor also enhance the dubious narrative. As ironies keep piling up, I guarantee that you will chuckle every time the film hits you with one of its wacky twists. Dead Ringer even offers a series of moral lessons: “be happy with what you have,” “jealousy is bad,” “let go of the past,” and more important, “before you embark on a journey of revenge, dig two graves.” 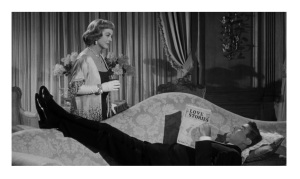 It helps a great deal that Davis has a good rapport with her two main co-stars: Karl Malden (Patton) is fine as a decent detective in love with the “good sister” and Peter Lawford (Good News) is wonderfully as the sleazy lover of the “bad sister.”

The visual effects are simple, but effective. The camera work (this is cinematographer Ernest Haller’s last movie) and editing are clever enough to make you believe the twin sisters are real. Davis does, of course, a phenomenally good job here (she played twins in A Stolen Life), but one can’t underestimate the skill required to create the proper illusion. Andre Previn’s (Irma la Douce) jazzy music score is a plus.

Dead Ringer is nowhere as thrilling as What Ever Happened to Baby Jane? (few films are), but it is grand entertainment of the ghoulish kind. The film is surprisingly polished and well-acted, and there’s a good chance that you’ll laugh your head off as you watch Bette Davis try to out-act Bette Davis. B&W, 115 minutes, Not Rated.