A 20-year veteran of the Los Angeles Police Department, Bumper Morgan (William Holden, The Bridge on the River Kwai), suddenly decides to retire, but before he hangs his uniform Morgan wants to solve the brutal murder of a prostitute.

“I think I’m doing something for people every time I make a good bust.”

I’m sure most people can relate to me when I say I can’t count how many cop movies I’ve seen. What about TV shows that revolve around police officers? Hawaii Five-O, Kojak, Hill Street Blues, Cagney and Lacey, Miami Vice, etc. I have watched them all. So it isn’t faint praise when I say that this TV limited-series is one of the best cop shows I’ve seen — The Blue Knight encapsulates the whole gamut of life as a cop splendidly.

The mini-series is based on a book written by former Los Angeles police detective Joseph Wambaugh. I’ve never read one of Wambaugh’s books, but I’ve watched a few movies based on his work. The Blue Knight incisively examines the difficulties involved in being a police officer, and that’s the trademark of Wambaugh’s oeuvre.

I loved how the TV program takes its time to show the everyday aspects of police work. The interactions with the public, the camaraderie among policemen, the craft, the emotional toll, the frustrations, the accomplishments, everything a cop goes through on a daily basis is presented in a remarkably unfeigned and gritty manner. 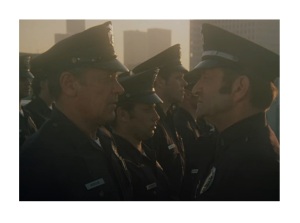 Since it was written by a former cop, I expected The Blue Knight to glorify law enforcement, but I couldn’t have been more wrong. The program shows the good, bad and ugly of policing and lets viewers come up with their own conclusions.

William Holden’s Bumper Morgan is an anti-hero in the true sense of the word. While Morgan isn’t as morally problematic as Popeye Doyle or Harry Callahan, he isn’t perfect either. We see him roughing up suspects, we see him breaking rules right and left, we even see him committing perjury during a court hearing. We also see the character’s good attributes. He is brave, dedicated, and compassionate.

Days after watching the mini-series, I still don’t know how I feel about the title character. My ambivalence towards the protagonist is due in large part to Holden’s brilliant, Emmy-winning performance. The actor is so good at projecting the character’s innate decency that I couldn’t help but like him despite his admittedly bad behavior.

The supporting performances are all excellent, too. Lee Remick (The Omen), who plays Holden’s girlfriend, does a fine job expressing her character’s fears and insecurities. Eileen Brennan (Private Benjamin) is wonderfully earthy as an over-the-hill stripper. A very young Anne Archer (Fatal Attraction) is fabulous as a sassy prostitute. And a mustache-less Sam Elliott (Tombstone) plays Detective Charlie Bronski.

I recommend The Blue Knight to anyone who enjoy movies about cops. I also recommended it to fans of actor William Holden. This was Holden’s first TV production, and it’s one of the best things he ever did. Had this been a theatrical movie, I’m sure he would have won an Oscar. Followed by a short-lived TV series, with George Kenney (Cool Hand Luke) taking over Holden’s role. Color, 188 minutes, Not Rated.

This is my contribution to the 5th Golden Boy Blogathon: A William Holden Celebration, hosted by Love Letters to Old Hollywood, The Wonderful World of Cinema and The Flapper Dame. 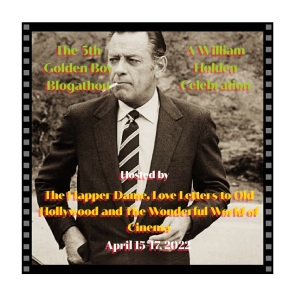