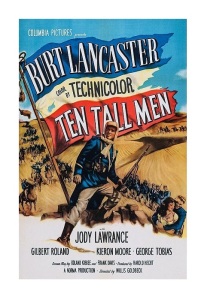 In the 1920s, An American serving in the French Foreign Legion, Sergeant Mike Kincaid (Burt Lancaster, Birdman of Alcatraz), and his motley crew attempt to stop an impending enemy attack on a fort during The Rif War in North Africa.

“The main reason we’re going to do it is we have no other choice. ”

Burt Lancaster is the kind of movie star you don’t see anymore. His eclectic resume is a combination of crime thrillers, socially-conscious dramas and popcorn flicks. Columbia’s Ten Tall Men belongs to the last group — it’s a mindless, action-packed adventure tale whose only sin is being too eager to give the audience a good ol’ time.

Produced by Lancaster’s own film company, Norma Productions, the ex-acrobat knew a thing or two about how to put on a great show. Shot in beautiful Technicolor
by William E. Snyder (Cecil B. DeMille’s The Story of Dr. Wassell), Ten Tall Men is easy on the eyes. It’s even easier on the buttocks — it’s a briskly-paced movie.

Written by Roland Kibbee (A Night in Casablanca) and Frank Davis (Jim Thorpe – All-American), Ten Tall Men was conceived as a western but was turned into “a desert Fame and the Arrow” halfway through the writing process. At first, I was thinking, “This is silly!” But half hour into the movie I found myself totally absorbed in the movie — it isn’t as good as Gunga Din (1939), but it’s very entertaining. 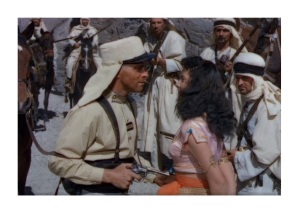 Furthermore, Lancaster is tons of fun as the movie’s daredevil hero. Ten Tall Men is another proof that Lancaster is one of cinema’s most intelligent action stars. He understood the importance of body movement in acting. We know exactly who this character is and what makes him tick, and it’s all owing to the fact that Lancaster is so good at conveying ideas and emotions with his body.

Is Ten Tall Men a great movie? Nope. Is it fun and entertaining? Absolutely! I expected a forgettable action movie, but I ended up liking it a lot. Trivia Alert: This is where Burt Lancaster met long-time friend and collaborator, director Robert Aldrich, who was the film’s production manager. Lancaster and Aldrich made four movies together — Apache (1954), Vera Cruz (1954), Ulzana’s Raid (1972) and Twilight’s Last Gleaming (1977) — over a span of three decades. Color, 97 minutes, Not Rated.