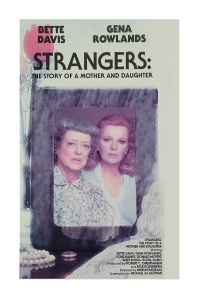 A tough New England widow’s (Bette Davis) quiet life is disrupted when she gets an unannounced visit from her estranged daughter (Gena Rowlands, A Woman Under the Influence) who had left home twenty years before on bad terms.

“Is it such a terrible thing to love your mother?”

The title says it all. Strangers: The Story of a Mother and Daughter is a made-for-television chamber piece about a woman trying to mend her broken relationship with her elderly mother. It’s literate like a good play, but it never feels overwritten or overplayed, thanks to the skillful direction by Milton Katselas (Butterflies Are Free and 40 Carats) and the outstanding performances by its two leading actresses. 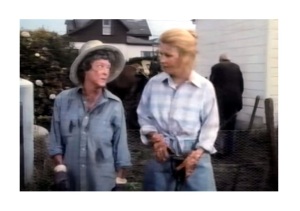 Novelist Thomas Wolfe once famously said that “you can’t never go home again.” Someone should have told Wolfe that sometimes you need to return home. Well, at least that’s the premise of this incisive, emotionally-changed drama. Strangers is about the importance of dealing with the ghosts of the past before you become a ghost yourself.

The film is essentially a collection of conversations between the two main characters, therefore it’s talky and slow. But Strangers is so well-written and acted that I didn’t mind the fact that the majority of the movie takes place in a few locations. All pivotal scenes pack the necessary punch, and the ending is touching without being mushy. 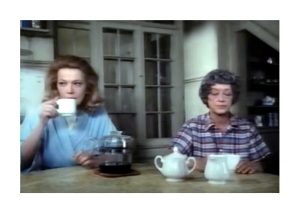 The acting by Bette Davis and Gena Rowlands is superb. Both ladies were nominated for an Emmy (Davis won). I’ve always been a huge admirer of both actresses, and I wasn’t  surprised to see them delve deep into their characters. It did surprise me that Davis and Rowlands were in perfect synch throughout the whole movie.

Rowlands’s manufactured spontaneity, perfectly displayed in hubby John Cassavetes’s gorgeously rambling masterworks, is the antithesis of Davis’s classical acting style. There is always a debate about which style is better, but as I was watching the two actresses intact, I realized that this is a rather silly argument — the end result is what matters. The chemistry between Davis and Rowlands is spectacular.

Are you looking for a good movie for grown-ups? You need to look no further, Strangers: The Story of a Mother and Daughter deals with the problems of average adults in a meaningful way. As an added bonus, you get to see two of America’s finest actresses, Bette Davis and Gena Rowlands, together for the first time and only time in their long careers. The film is available on YouTube. Color, 90 minutes, Not Rated.