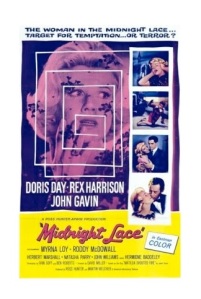 After marrying a British businessman (Rex Harrison, My Fair Lady), an American woman (Doris Day, Pillow Talk) moves to London, where she immediately starts receiving threatening phone calls. Scared for her life, the lady asks the police for help, but the authorities suspect that she is just a neurotic housewife seeking attention.

“Careful, Mrs. Preston. I wouldn’t want you to get hurt. Not yet.”

You can always count on producer Ross Hunter (Airport) to make a good-looking movie. Hunter believed that aesthetics are the most important elements of cinema. Who cares about having a great script when you have beautiful actors, fancy gowns, glossy camerawork and posh sets? He might have been onto something. 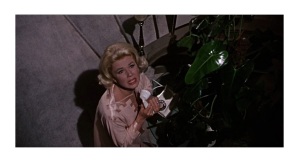 As I was watching Hunter’s daffy thriller Midnight Lace, I found myself completely immersed in the movie’s ridiculously super-slick world. The film is artificial to the nth degree, and derivative as heck, yet I enjoyed every moment of it. It just proves that Hunter was right all along: style-over-substance movies can be a lot of fun.

Midnight Lace is like a dumbed-down version of Alfred Hitchcock’s Dial M for Murder (1954) (British actors John Williams and Anthony Dawson appear in both movies). If you think this comparison spoils the film for you, I want to assure you that this is an unspoilable movie. I’ll bet a Givenchy powder puff that anyone five years of age or older will be able to predict the final twist ten minutes into the movie.

Midnight Lace also anticipates the so-called “hagsploitation” craze of the 1960s. The only difference between this, and, let’s say, something like Robert Aldrich’s Hush… Hush Sweet Charlotte (1964), is that Doris Day was in her prime when she made the film, hardly the middle-aged heroine who is often found at the center of these types of films.

Speaking of Day, I have to praise her for producing and sustaining the proper amount of hysteria throughout the entire movie. According to some sources, Day was so immersed in her character that she passed out during one of her breakdown scenes. It is her last dramatic part, and it’s a pity that she spent the rest of her career in light comedies and musicals — I would have loved to see her take on more serious roles. 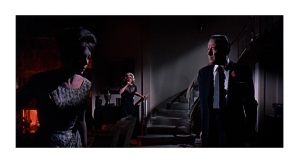 I tend to judge movies for what they want to do, not for what I want them to do. Sleekly directed by David Miller (Captain Newman, M.D.), Midnight Lace was made for the sole purpose of giving fans of damsel-in-distress thrillers a good time, and on those terms, the film is a success. Notwithstanding a flawed script, the movie works as a snazzy slice of silly entertainment. Color, 108 minutes, Not Rated.

This is my contribution to Doris Day Blogathon, hosted by Love Letters to Old Hollywood. 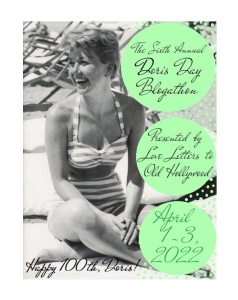