A 56-year-old widower businessman (Fredric March, William Wyler’s The Best Years of Our Lives) shocks family and friends when he starts dating a 24-year-old divorcee (Kim Novak, Alfred Hitchcock’s Vertigo) who works for him.

“Love, no matter how shabby it may seem, is still a beautiful thing.”

I’m always intrigued by how artists perceive their own work. I was browsing the internet and I came across an interview with actress Kim Novak in which she mentioned that Middle of the Night contains her best screen work. That naturally piqued my interest. After watching the movie, I concluded that Novak is probably right; she is absolutely brilliant in a challenging role. And the movie is pretty great too.

Directed by Delbert Mann (Separate Tables) from a script by playwright Paddy Chayefsky (Network) based on his 1954 Broadway play of the same name. Middle of the Night is the most interesting of the three movies Mann and Chayefsky collaborated on (Marty and The Bachelor Party are the other two films).

Middle of the Night fearlessly dives into the rowdy waters of adult life. It’s a grown up movie about very grown up problems. It’s refreshing to see characters that behave like real people with real difficulties. Many adult issues — bouts of self-doubt, longing for love and happiness, etc. — are depicted with tenderness, sadness and high drama. 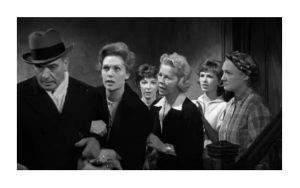 The two main characters are endowed with genuine emotions. They act and talk like people we have met. Their relationship feels real. These characters force the viewer to reevaluate what love is for. They need their love for sanity in a crazy world. It’s actually more than just love, it’s a life jacket that keeps them safe and secure.

Kim Novak and Fredric March are superb in the movie. Novak, in particular, is a revelation. Even though I’ve long believed that she is a much better actor than what she gets credit for, I wasn’t really prepared by how great Novak is in this movie — it’s a performance with a lot of heart, certainly one of the actor’s very best. 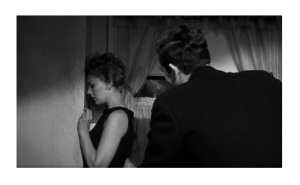 If I have one complaint is that the movie never explains Novak’s behavior. Because of the lack of clarity, Novak sometimes comes across a little flaky. I theorized that she was suffering from some unnamed anxiety disorder, but that’s just my interpretation of the character’s actions. I’m open to other explanations.

March matches Novak emotion for emotion. Although he looks too old to play a man in his mid-fifties, March is genuinely touching as a lonely man who gets a second chance at happiness. In addition to March and Novak, you’ll see Lee Grant (Detective’s Story) as Novak’s best friend, Martin Balsam (All the President’s Men) as March’s pragmatic son-in-law and Glenda Farrell (Lady for a Day) as Novak’s embittered mother.

While not as popular as Paddy Chayefsky’s Marty (1955) or Network (1976), Middle of the Night is worth looking for. This isn’t one of those generic May-December romances. It’s an effective, touching investigation of the difficulty of breaking free from social expectations. Chayefsky’s script has many memorable lines, and stars Kim Novak and Fredric March are excellent. A hidden gem. B&W, 118 minutes, Not Rated.

This is my contribution to The Kim Novak Blogathon: An 89th Birthday Celebration, hosted by The Classic Movie Muse. 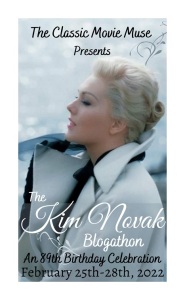