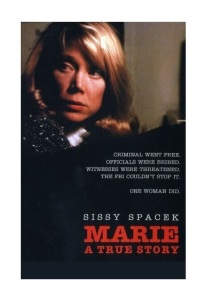 After graduating from college, single-mom Marie Ragghianti (Sissy Spacek, Carrie) lands a job as an officer for the Tennessee Department of Corrections. Later, Ragghianti is appointed to the position of chairwoman of the parole board and quickly discovers a culture of corruption in the department.

“If they think I’m some kind of cupcake, they’ve got another thing coming.”

Sometimes all a movie needs is a good script and everything else falls into place. Other times an actor’s performance is good enough to hold everything together. This fact-based political drama is anchored by the superb work of thespian extraordinaire Sissy Spacek. Because Spacek is so good, Marie ends up being better than it deserves to be.

Based on a non-fiction book by biographer and journalist Peter Maas (Serpico), Marie is the true story of Marie Ragghianti, who in 1977 blew the whistle on then Tennessee Governor Ray Blanton’s pardon bribery scheme. The film chronicles both Ragghianti’s personal struggles and battles against Blanton’s political machine.

Directed by Roger Donaldson (The Bounty and Thirteen Days), Marie is, unfortunately, a tad unfocused. In my opinion, the film’s main problem is that it doesn’t know what it wants to be, a rags-to-riches melodrama or a taut conspiracy thriller. The film also tries to say something about sexism in politics, but that angle is left mostly unexplored.

John Briley’s (Richard Attenborough’s Gandhi) screenplay could have benefited from a few more re-writes, but luckily, Spacek throws the film over her shoulders and carries it to the finish line. You sense that Spacek understands that it’s up to her to make it all work, and comes fully prepared to hit a much-needed home run.

While it’s true that Spacek saves this movie from itself, I don’t want to give the impression that there aren’t any other good performances in the film. Jeff Daniels (Terms of Endearment) and pre-stardom Morgan Freeman (The Shawshank Redemption) are wonderfully dastardly as a couple of corrupt government officials.

This is the first movie of lawyer-turned-politician-turned-actor Fred Thompson (The Hunt for Red October), who had been Ragghianti’s attorney in a lawsuit against the state of Tennessee. Thompson was originally hired as an advisor, but director Donaldson asked him if he would consider playing himself in the movie and, as they say, the rest is history. Also with Keith Szarabajka (A Perfect World) as Spacek’s confidant.

Despite its interesting storyline and the presence of then popular star Sissy Spacek, Marie was a box-office flop. Perhaps the movie’s innocuous title had something to do with it, I don’t know. Anyhow, I would recommend Marie to viewers who enjoy “David-versus-Goliath” stories — think Norma Rae (1979) meets Brubaker (1980). Needless to say, a must-see movie for Sissy’s fans. Color, 111 minutes, Rated R.