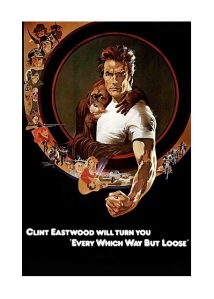 A tough, but not-too-bright trucker and part-time street fighter, Philo Beddoe (Clint Eastwood, Dirty Harry), falls for country singer Lynn Halsey-Taylor (Sondra Locke, The Gauntlet). When Lynn takes off without telling Philo, he sets out to find her with the help of his pet orangutan and best friend, Orville (Geoffrey Lewis, Salem’s Lot).

“There can’t be too many guys driving around this valley with an ape!”

Every Which Way but Loose, Clint Eastwood’s first full-blown comedy, was widely panned by critics, yet audiences loved it — the film became one of the highest grossing comedies of all time. In fact, it’s Eastwood’s biggest hit to date (nearly half a billion in today’s money). But, who was right, the critics or the audience?

Allegedly, Jeremy Joe Kronsberg (Going Ape!) wrote Every Which Way but Loose for actor Burt Reynolds (Hooper). Eastwood read the script and asked Warner Bros. to buy it for him. The studio thought Eastwood was nuts, but the actor’s instincts were correct. The film didn’t win him any awards, but it did make him wealthier.

When I was a kid, Every Which Way but Loose was always on TV and I remember watching it many times. Eastwood and an orangutan, how can any kid resist that? Right? As I was re-watching this movie for the first time in years, I quickly found out that I’ve outgrown it. I immediately noticed how badly scripted the movie is. The film is mostly a bunch of silly vignettes that are loosely connected. It’s also way too long. 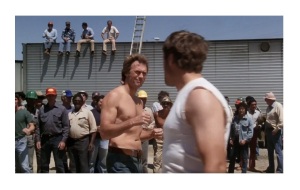 Eastwood isn’t very good, either. He isn’t remotely believable as one of those blue-collar simpletons popularized by actor Gary Cooper (e.g. Mr. Deeds Goes to Town). In all fairness, I don’t think Burt Reynolds would have been any better. Sondra Locke, who plays the cynical country singer (she belts out a few songs), is much, much better. However, Locker’s realistic performance belongs in another film.

The orangutan and Ruth Gordon (Rosemary’s Baby), who plays Eastwood’s senile mother, provide the funniest moments in the film. Making fun of an elderly woman and a simian is a cheap way to elicit laughs from the audience, but it kind of works (my favorite scene from the movie is when Gordon confronts a biker gang). That is why I couldn’t understand why the script doesn’t give them more to do. Also with Beverly D’Angelo (National Lampoon’s Vacation) in one of her first movie roles.

I can’t really recommend a movie like Every Which Way but Loose — it’s a pretty silly comedy. The film is tonally uneven and badly structured, even on its own terms. I do have to admit that I was never bored and found myself laughing at some silly jokes. Mostly for viewers looking for mindless entertainment. Color, 114 minutes, Rated PG.