The year is 2293. Earth’s population is divided into two fractions: “The Eternals,” a group of ritzy immortals, and “The Brutals,” a proletarian class composed of mortals. “The Brutals” work the land, while “The Eternals” enjoy an idle life of luxury inside a facility called “The Vortex.” When an inquisitive Brutal, Zed (Sir Sean Connery, Dr. No), penetrates “The Vortex,” the collapse of the power structure seems inevitable.

“In hunting you, I have become you.”

Over the years, I have found it very amusing when a film is labeled as a “cult classic.” To paraphrase what director King Vidor once said, “cult status” implies a mixture of admiration and contempt. This curious designation insinuates that a group of people, for whatever reason, venerates a particular film that was initially written off as a waste of time by critics and/or the vast majority of moviegoers.

As far as I’m concerned, the wacky musical The Rocky Horror Picture Show is the movie that best defines the term “cult film” (although the film itself is almost beyond description). Sometimes I truly understand a particular fascination with a movie (Alejandro Jodorowsky’s 1970 western El Topo), and many times I just don’t get what all the fuss is about (David Lynch’s 1977 chiller Eraserhead).

In my opinion, the ’70s were the Golden Era of cult movies. With the collapse of the old studio system, many filmmakers were able to get their unorthodox projects financed. The enormous success of a cheaply-made movie like Night of the Living Dead (1968) proved that there was a market for these types of movies. John Boorman’s pet project Zardoz stands out from a crowded field of movie oddities for a number of reasons.

As a rule of thumb, first-time filmmakers begin their careers with small-budget films, hoping that one day a producer will offer them a Class-A movie. This is one of many reasons Zardoz is so strange. After entering the big leagues in 1972 with the highly acclaimed thriller Deliverance, British director Boorman did the one thing no filmmaker does once he/she achieves success: Boorman followed up his enormous critical and commercial success with the small-scale and noncommercial Zardoz.

Professional film critics slaughtered the movie, and audiences mostly ignored it. I genuinely think Zardoz is a fascinating sci-fi opus. Yes, I’ve heard all the jokes about the film — “Sean Connery in diapers,” “Penis is evil,” etc. — yet I fell in love with the movie the moment I discovered it one late night on TV. I was immediately drawn to the film’s unusual storyline and esoteric look. The technical elements — cinematography, sets, optical effects, etc. — brim with imagination and vision.

Writer and director Boorman insisted that the movie was meant to be an allegory of the “haves vs have-nots,” but I interpreted it as a mediation on religion. Does God exist? What is the purpose of religion in our lives? Boorman smartly explores these difficult questions and much more. And I’m sure book lovers will enjoy the fact that a famous classic of literature — I can’t say which one — plays a key role in the movie.

But the smartest thing Booman did was hire Sean Connery for the lead role. Boorman assumed correctly that viewers would forgive Connery no matter his actions. The actor plays a rapist and murderer, but because this is Connery, an actor almost impossible to dislike, you are never turned off by his unheroic actions. Plus, only Connery could get away with wearing go-go boots, red underwear and a ponytail! The cast also includes the great Charlotte Rampling (The Verdict) as Connery’s main antagonist.

Is Zardoz a thought-provoking dystopian saga, or is it just pretentious drivel? Who knows? All I can say is that I love everything about the movie. I was particularly impressed with the way director John Boorman made the best of the limited resources at his disposal — Zardoz looks fantastic despite having a relatively low-budget (for a science fiction movie) — it only cost approx. 1.4 million (approx. 7.8 million in 2021). For people with an eclectic taste in movies. Color, 105 minutes, Rated R.

This is my contribution to The Bond Not Bond Blogathon, hosted by RealweegiemidgetReviews and Pale Writer. 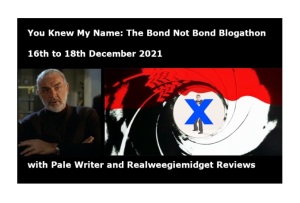