A terrifying encounter with the supernatural is guaranteed to all customers who buy (or steal) items from an old antique store.

“… each purchase comes with a big novelty surprise.”

From Amicus Productions, the legendary British film company that specialized in horror movies, comes this anthology movie that consists of four macabre tales linked by an antique shop, Temptations Ltd., owned by a mysterious elderly man played by none other than horror icon Peter Cushing (The Curse of Frankenstein). Truth be told, it isn’t one of the company’s best anthologies. I loved it nonetheless.

The first story, “The Gatecrasher” (approx. 20 min.), involves a man (David Warner, Time After Time) who tricks the owner of the antique shop into selling him a priceless mirror at a bargain price. The man takes the mirror home, only to find out that there is a devilish figure — Jack the Ripper? — inside the mirror that compels him to kill.

An Act of Kindness

The second tale, “An Act of Kindness” (approx. 25 min.), features an unhappily married office manager (Ian Bannen, Hope and Glory) who steals a war medal from the novelty store in order to impress a street vendor (Donald Pleasence, John Carpenter’s Halloween). Later, the huckster introduces the manager to his daughter (Pleasence’s real-life daughter Angela, Symptoms), who isn’t as nice as she appears to be…

This is by far my favorite segment. It’s creepy, and the ending is nuts! Pleasence and his daughter Angela (she has her dad’s piercing blue eyes) make a great team. Diana Dors appears in a small role as Bannen’s nagging wife. I would argue that the former sex symbol was more effective in these character parts than in the sex comedies that made her famous — Dors tears into Bannen’s namby-pamby husband with great delight.

The third tale, “The Elemental” (approx. 20 min.), focuses on a businessman (Ian Carmichael, I’m All Right Jack) who goes to the antique shop and switches price tags on a couple of  snuffboxes. On his way back home, he bumps into a psychic (Margaret Leighton, Under Capricorn) who informs him that he has a demon on his shoulder.

“The Elemental” is like a spoof of The Exorcist, with Leighton — she’s almost unrecognizable behind a big wig and thick glasses — stealing the show as a kooky clairvoyant who performs one hell of an exorcism. Leighton’s hilariously quirky performance makes the tale more funny than scary, but like the other segments, the tale ends on an appropriately sour note. 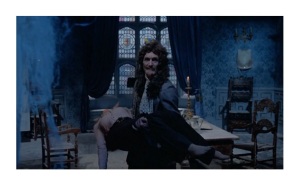 “The Door” (approx. 20 min.) is the title of the fourth and last story. The segment revolves around a young writer (Ian Ogilvy, And Now the Screaming Starts) who buys a centuries-old door from the antique shop, unaware that the baroque door is nothing but a trap created by a malevolent sorcerer (Jack Watson, Schizo).

“The Door” is, in my opinion, the weakest segment. The idea is good, but the story felt rushed, and I didn’t think the ending was strong enough. It’s very atmospheric, however. And you get to see the gorgeous Lesley-Anne Down (The Great Train Robbery) in one of her very first film roles (I didn’t even recognize her at first).

Although not in the league of Amicus’s anthologies Tales From the Crypt (1972) or The Vault of Horror (1973), I loved From Beyond the Grave, warts and all — it’s a fun horror omnibus. Well-directed by Kevin Connor (The Land That Time Forgot and The People That Time Forgot) and splendidly photographed by Alan Hume (For Your Eyes Only and Return of the Jedi). Recommended. Color, 98 minutes, Rated PG.

This is my contribution to the Third Great Hammer-Amicus Blogathon, hosted by Cinematic Catharsis and Realweegiemidget Reviews. 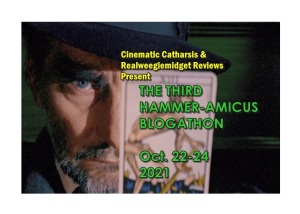