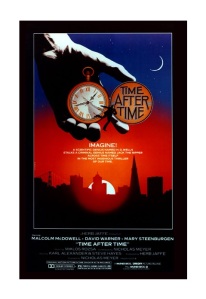 One night in 1893, British novelist and inventor H.G. Wells (Malcolm McDowell, A Clockwork Orange) informs a group of friends that he has built a time machine. However, one of his guests turns out to be Jack the Ripper (David Warner, Time Bandits), and he uses the machine to escape from the police. Wells follows Jack to 1970s San Francisco, and with the help of a bank teller, Amy Robbins (Mary Steenburgen, Melvin and Howard), Wells sets out to stop Jack’s murderous streak.

“Every age is the same. It’s only love that makes any of them bearable.”

First-time director Nicholas Meyer (of Star Trek II: The Wrath of Khan fame) performs a small miracle here: Time After Time tries to be many things at once, which increases the chance for failure, yet the movie succeeds exceedingly well at all levels — Meyer infuses the story with a great sense of energy and sly humor.

Time After Time is a combination of genres that reportedly don’t belong together, and the movie triumphs where so many others fail because filmmaker Meyer is somehow able to blend different ideas into a cohesive adventure piece. Additionally, the narrative playfully mixes facts with fiction, and there are some clever references to literary characters and other movies, including Sir Arthur Conan Doyle’s sleuth Sherlock Holmes and George Pal’s beloved sci-fi classic The Time Machine (1960).

As just stated above, the movie wears many hats: Time After Time is a fanciful time-travel story, a sharp social satire, a quirky romance and a suspenseful serial-killer thriller. Amazingly, director-writer Meyer doesn’t stumble once, despite ample opportunities to do so. There isn’t a single dull patch throughout the film. Like any other time-travel movie, Time After Time has its share of inconsistencies, but it’s such a thrilling and fun ride that you won’t care about the occasional lapses in logic.

Aside from Meyer’s skills as a storyteller, Time After Time works because of a trio of superb performances. Malcolm McDowell is a fantastic hero. It’s hard to believe this is the same actor that scared the living daylights out of me in Stanley Kubrick’s controversial masterpiece A Clockwork Orange (1971). McDowell’s Wells is charming and winsome, words I thought I would never use to describe McDowell’s work.

In only her second movie role, Mary Steenburgen is an appealing heroine — she perfectly embodies all the strengths and weaknesses of a modern woman. Furthermore, Steenburgen and McDowell have tremendous chemistry — I wasn’t surprised at all to read that they married right after completing the film. British character actor David Warner’s chilling performance as the infamous “Jack The Ripper” offers a perfect contrast to McDowell and Steenburgen’s warm characterizations.

Miklós Rózsa’s (Spellbound) bombastic music score is one of his best. Because the mood of the film changes from scene to scene, Rózsa had to play catch up. I don’t know anything about music, but I imagine it would be difficult to score a movie that doesn’t stay in one lane. All I can say is that I was impressed with Rózsa’s versatility.

Time After Time is my idea of a perfect Sunday afternoon movie. The film has everything: action, humor, romance, suspense, and even a bit of social commentary. Time After Time is tons of fun and therefore highly recommended to all movie lovers! P.S. The little kid at the museum is Corey Feldman (Stand by Me). And yes, pop star Cyndi Lauper named her signature song after the movie. Color, 112 minutes, Rated PG.