Stardate 2817.6. Captain James T. Kirk is tasked with determining whether or not a celebrated Shakespearean actor, Anton Karidian (Arnold Moss, The Loves of Carmen and Viva Zapata!), is in reality a wanted criminal known as Kodos The Executioner, a deposed dictator responsible for hundreds of dead.

A genuinely intriguing and timely tale, The Conscience of the King digs deep into the ethics of power and politics. It’s also recognized as the very first episode of the series that explicitly talks about eugenics, a source of great anxiety among people intensely preoccupied with the effects of technology on morality.

Written by Barry Trivers (The Wagons Roll at Night) and directed by Gerd Oswald (original A Kiss Before Dying), The Conscience of the King distinguishes itself from previous episodes by relying heavily on dialogue (the action is confined to a few locales) — it’s essentially a character-driven journey to find the answers.

The Conscience of the King is merely an excuse to explore some political and cultural topics of the 1960s. Trivers’s teleplay was clearly inspired by the hunt for Nazi war criminals after World War II. The episode deals, among other things, with the difficulty of pursuing justice in an imperfect world. The program also explores the logical consequences of playing god, and the ethics of authoritarianism. 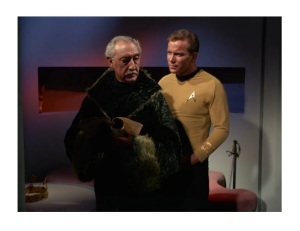 Sadly, a few things prevent The Conscience of the King from achieving higher levels of excellence. The story’s internal logic is flawed (why would a fugitive choose to become a travelling actor?), and scientific advances have rendered some key plot points ineffective. I did like the episode’s suggestion that technology won’t replace literature.

I really like Capt. Kirk here. The Captain, who would later describe himself as someone who rushes in “where angels fear to tread,” shows the kind of level-headedness that one should expect from any effective leader. And once again, Shatner surprised me with a beautifully restrained performance. I did wish they had hired a big-name actor to play the pivotal role of Karidian (maybe Jose Ferrer, Cyrano de Bergerac).

The Conscience of the King does lack that extra “something” to make it a truly special experience. That said, this is a solid episode. The premise is intriguing and the acting is particularly strong. I also enjoyed the episode’s many references to Shakespeare’s works. P.S. The episode features the final appearance of Yeoman Janice Rand, played by Grace Lee Whitney (Billy Wilder’s Some Like it Hot). Color, 50 minutes, Not Rated.

← Previous Voyage: The Menagerie (Part I &II)     Next Voyage: Balance of Terror →