Two orphaned siblings (Ike Eisenmann, Star Trek II: the Wrath of Khan, and Kim Richards, Tuff Turff) with extraordinary powers are adopted by a wealthy philanthropist (Ray Milland, The Lost Weekend). However, the kids find out that the supposedly benevolent millionaire is only interested in exploiting their powers.

“I should have known there was more than ESP to those two.”

After the sudden death of Walt Disney in 1966, the company that bears his name vowed to continue bringing wholesome family movies to the hungry masses. Soon enough the House of Mickey Mouse realized that one can’t live on sugar alone. 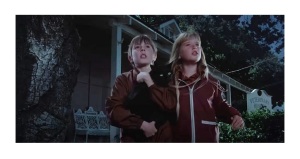 I don’t know exactly when Disney decided to go after an older audience, but as I was watching Escape to Witch Mountain, I noticed that this fantasy film was a bit darker than your typical Disney fare. On the surface, the movie appears to be another kiddie show, but that’s not the case —  it’s quite serious for the most part.

Based on science fiction writer Alexander Hill Key’s book of the same name, Escape to Witch Mountain is not all fun and games. Though it has many light moments, the film has a bite to it. Director John Hough (The Legend of Hell House and Dirty Mary Crazy Larry) allows darkness to creep in during some key moments — Hough counters sweetness with acidity exceedingly well. Even though the story ends on a positive note, the kids are subjected to a rather intense and ugly chase across the country. 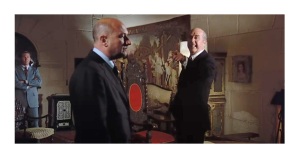 The somber subtext is reinforced by the dry work of actors Ray Milland and Donald Pleasence (he plays Milland’s henchman). Milland’s character doesn’t have any redeeming qualities — he’s pure evil! Pleasence is so creepily determined that you would think he is going after unstoppable killer Michael Myers, not two little kids!

The visual effects are disappointing, though. The effects don’t live up to the standards set by Disney’s Mary Poppins (1964) and Bedknobs and Broomsticks (1971). Aren’t visual effects supposed to get better with time? By the way, the film’s much-anticipated climax is similar to the one in Steven Spielberg’s E.T. the Extra-Terrestrial (1982) (a winnebago instead of a bicycle, but the scenes are almost identical).

Escape to Witch Mountain isn’t entirely successful at blending wholesomeness with adult themes (the shoddy special effects put a damper on things), but I enjoyed it as an experiment of sorts — it’s like a G-rated adaptation of a Stephen King story (on the flip side, King’s Firestarter is like a grittier version of Escape to Witch Mountain). A flawed but fun Disney movie. Remade in 2008. Color, 94 minutes, Rated G.

Followed by Return to Witch Mountain (1978)