“Charlie” (Teresa Wright, Mrs. Miniver) is a young woman bored with small-town life. When her mother’s brother, “Uncle Charlie” (Joseph Cotten, The Third Man), announces he’ll come for a visit, “Charlie” is sure that her charismatic uncle will put an end to the monotony of her life. Be careful what you wish for…

“Do you know the world is a foul sty?”

Shadow of a Doubt is known as Alfred Hitchcock’s favorite of his own films (interestingly, Hitch later walked back his comments). Though the film isn’t my favorite Hitchcock movie, it isn’t too hard to see why the celebrated British filmmaker, who was known for his naughty sense of humor, liked the movie so much — this slow-burn thriller remains one of The Master of Suspense’s most perverse concoctions.

Shadow of a Doubt is an odd 1940s movie. While most Hollywood filmmakers were trying to inform the public about overseas threats during WWII, Hitchcock was hard at work unearthing homegrown sins. This is the opposite of a wartime Americana, which was meant to lift people’s spirits — instead of providing comfort and hope, Hitchcock gave audiences something that amplified their stress levels.

As in his previous film Saboteur (1942), the director boldly deconstructs the idea of America as a pillar of goodness, a shocking thing to do, especially coming from a foreigner, at a time when the country was in the midst of a righteous war. It is only because of his great skills as a filmmaker that Hitchcock managed to get away with something that could easily be misconstrued as unpatriotic.

Hitchcock’s main accomplice was dramatist Thornton Wilder, whose celebrated play Our Town is the epitome of classic Americana. Wilder turned an original idea by Gordon McDonell into a script. Hitch and wife Alma wrote the final draft. Sally Benson (Meet Me in St. Louis) was hired to add humor to the script. Actress Patricia Collinge (The Little Foxes), who plays Teresa Wright’s mother, re-wrote some scenes.

Despite all the script tinkering, Shadow of a Doubt is remarkably focused and consistent. This is a thorough treatise on not only the contradictions of American life, but also the duality in human nature. Using all the tools at his disposal (dialogue, lighting, editing, etc.), Hitchcock is able to demonstrate that life is made of opposites and contrasts. From beginning to end, the director purposely plays a mix-and-match game — Hitch somehow manages to make incompatible elements coexist together in total harmony. 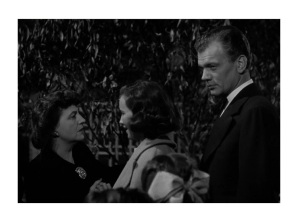 Speaking of two opposing elements coexisting together, it’s strange to see  a few dumb moments in such a smart movie. I get that Hitchcock wasn’t big on logic, but I still found it a little ridiculous the way the supposedly smart “Uncle Charlie” gives himself away by stupidly removing a news article from a local paper. I also thought Hitchcock made the mistake of trying to explain the uncle’s psychopathy.

While I clearly had issues with some sections of the story, I found nothing to complain about regarding the acting in the film. Hitch wanted William Powell (The Thin Man) and Olivia de Havilland (Gone with the Wind) for “The Charlies” (Powell as a serial killer? I think not!). I’m glad neither actor was available. Cotten gives a performance for the ages. Wright is superb too. I loved Collinge’s humanity. Hume Cronyn (Brute Force) is funny as a nosey neighbor. Even the two little kids are awesome.

Author Donald Spoto wrote in his book The Art of Alfred Hitchcock that “(Shadow of a Doubt) places the director among the great moral cynics of our age.” I’m not sure that I would call Hitchcock a cynic. The last scene in the movie suggests that the niece is better off knowing that life is filled with wickedness. Perhaps Hitchcock wanted to convey the idea that “knowledge is power.” That isn’t cynicism… it’s wisdom. Remade in 1958 as Step Down to Terror, as a 1991 TV-movie and yet again in 2013 as Stoker with Matthew Goode (Watchmen) as Uncle Charlie. B&W, 108 minutes, Not Rated.