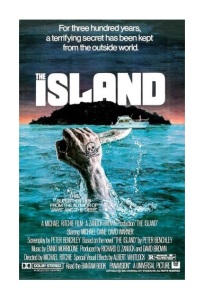 After reading that an abnormal amount of boats have vanished without a trace in the Bermuda Triangle (also known as the Devil’s Triangle), journalist Blair Maynard (Michael Caine, Alfie) convinces his boss to let him investigate the mysterious disappearances. Maynard travels to the Caribbean with his son and quickly comes face to face with the answer to his query: A band of pirates thought to be long gone.

“You and I are the only living men to see what lies before you now.”

I was maybe in 8th grade when I first saw the theatrical poster of The Island and I immediately made a mental note that I needed to watch the movie. When I finally rented it from the video store, I remember feeling disappointed that The Island didn’t live up to my very, very high expectations.

The poster made me think that I was about to watch a scary movie (a zombie flick or a slasher) but this is definitely not a horror movie. I can’t even call it a thriller since it isn’t very suspenseful. It’s a modern-day pirate movie and not a very successful one. Talk about getting your high hopes shattered! I certainly felt cheated.

I wasn’t the only one bamboozled. Apparently, star Michael Caine was duped as well. Caine wrote in his memoir, The Elephant to Hollywood, that “(The Island) should have been a success: producers Richard Zanuck and David Brown and author Peter Benchley had all been involved in the blockbuster Jaws but somewhere along the line the film just wasn’t scary.” Yeah, it’s difficult to ascertain what exactly went wrong here.

In all honesty, the original theatrical trailer (obviously, I hadn’t seen it until now) tells you that this is a pirate movie. Anyhow, you may ask yourself, “Why re-watch something that I didn’t like the first time?” Well, I wanted to find out if having no expectations would change my feelings towards the movie. I did like it a tad more the second time around, but I still think that the movie doesn’t work as intended.

The premise is a good one: The Island comes up with an intriguing solution to the centuries-long mystery surrounding the Bermuda Triangle. Who would have thought it? UFOs (or magnetic fields) aren’t responsible for the mysterious disappearances. The truth is that there is a secret society of pirates that has managed to stay off the grid for centuries. Unfortunately, it sounds more interesting than it actually is.

The Island feels as if the filmmakers weren’t sure what kind of movie they wanted to make. The first thirty minutes reminded me of a gruesome Lucio Fulci horror movie. Once the pirates are introduced, the tone changes and we are suddenly in Neverland with David Warner (Time After Time) playing a sort of Captain Hook. The story concludes with a misguided, over-the-top climax straight out of a Rambo movie.

Perhaps my number one problem with the film is that the pirates aren’t all that threatening — most of these buccaneers are a little too civilized. If you are familiar with British actor Warner’s work you know he is capable of playing a great villain, but The Island doesn’t give him an opportunity to shine. On a positive note, however, the cinematography is good and Ennio Morricone’s (The Thing) music score is excellent — these are small rewards in an otherwise clumsy production.

I usually don’t say this, but The Island is prime candidate for a remake — as I said before, the movie has a great premise. While I never felt like I wasted my time, I wasn’t a happy camper when the end credits started to roll in. It’s always hard to see great potential being squandered. Michael Caine fans will probably want to check out The Island, but for everyone else, you’ve been duly warned. Color, 114 minutes, Rated R.

This is my contribution to the We Love Pirates Week Blog Party, hosted by Hamlett’s Soliloquy. 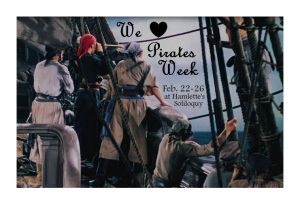