A band of pirates takes over a ship, killing almost everyone aboard. An aristocrat and his son (Douglas Fairbanks Sr., Robin Hood), somewhat survive the attack, but after the father dies from his injuries, the son decides to seek revenge against the pirates.

“I solemnly vow to bring thy murders to justice.”

The Black Pirate is the quintessential “star vehicle.” The film’s only purpose is to prove that Douglas Fairbanks Sr. was a great action movie star. Effortlessly displaying the physical abilities of an Olympic medalist, Fairbanks single-handedly transforms a simple silent movie into a thrilling viewing experience. 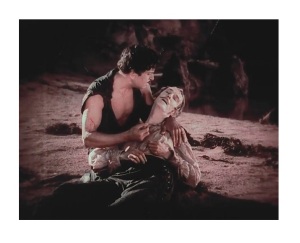 Rousing, imaginative and tremendously entertaining, The Black Pirate is a joy from beginning to end. There isn’t a single bland moment in the entire movie. The Black Pirate features grand sets and then-brand-new two-strip Technicolor cinematography, not to be confused with the lush three-strip Technicolor photography of movies like The Adventures of Robin Hood (1938) and Gone with the Wind (1939).

The first thing I noticed is how different this movie is from recent action flicks. Today’s filmmakers rely on shaky-cam and/or fast-cutting techniques to convey a sense of excitement. The opposite is true here. The hyperactive Fairbanks is solely responsible for amplifying the intensity of a scene. The man barely sits still. I don’t think I’ve ever seen an actor move as much as Fairbanks (he doesn’t walk, he hops!). The forty-three-year-old star has more energy than Dawne Johnson and Jason Statham put together!

The action set-pieces are a perfect complement to Fairbanks’s energetic persona. The huge sea battle sequences are particularly well staged. You can tell that a lot of planning went into building the necessary models and life-size vessels. There are also a handful of exciting sword fights. Interestingly, Fairbanks doesn’t want to merely win a duel — he wants to kill his opponent (every sword fight ends in death).

And the film contains one of cinema’s most memorable stunts: Fairbanks uses a knife to slide down a sail (Richard Donner’s 1985 cult classic The Goonies pays tribute to the iconic moment). Fairbanks seems so proud of himself that he does the trick two more times! As usual, Fairbanks doesn’t use any doubles, and it’s a true miracle that he didn’t break his neck. But wait, there is more: Fairbanks climbs walls, jumps all over the furniture and even gets to swim — we won’t see the likes of him ever again! 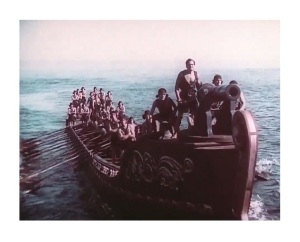 The Black Pirate does rely on lots of clichés associated with pirate movies, but one has to remember that this movie probably invented them. You have the slimy bad guy, the beautiful damsel in distress, the crusty pirate with a wooden peg leg, the oft-repeated phrases (“dead men tell no tales”), “the walk the plank” sequence, etc.

On a curious note, The Black Pirate doesn’t shy away from presenting the brutality associated with pirate life. I have to admit that I was a little taken aback by the sporadic moments of gruesome violence. For example, there is a nasty little moment at the beginning of the film: a man tries to hide a precious ring by swallowing it, but he is caught in the act and a pirate is ordered to remove the ring from the person’s stomach. Yikes! Who said that only modern filmmakers like violence?

The Black Pirate is perhaps the perfect movie to watch with people who may not be interested in silent cinema. It’s also the most accessible of all Fairbanks movies. This isn’t the actor’s best film (in my opinion, Thief of Bagdad is Fairbanks’s best movie), but it’s the one that best demonstrates that Fairbanks was an action star par excellence. If, after a long and hectic day at work, you want to watch something 100% fun, then The Black Pirate is for you. Two-Strip Color, 94 minutes, Not Rated.

This is my contribution to the We Love Pirates Week Blog Party, hosted by Hamlett’s Soliloquy.