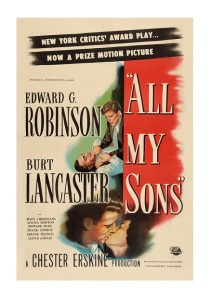 A self-made businessman (Edward G. Robinson, Little Caesar), who was once accused of knowingly selling defective equipment to the government during WWII, suddenly realizes that past mistakes have come back to haunt him.

“Don’t you think about people? Don’t you live in the world?”

This screen version of Arthur Miller’s Tony-winning play of the same name lacks the emotional intensity of the theatrical experience. In the end, what makes the movie work is the excellent work of actors Edward G. Robinson and Burt Lancaster. 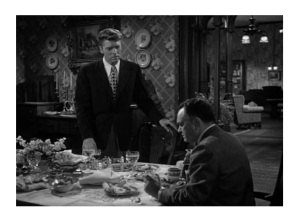 The play was adapted by Chester Erskine (The Egg and I), who also produced the movie for Universal. Erskine opened up the play too much, diluting some of the play’s raw energy in the process. Miller’s three-act play is entirely set in one location, and while I acknowledge that leaving the play as it was makes no cinematic sense, moving the action across multiple locales somehow hurts the flow of the story.

Perhaps Irving Reis (The Big Street and The Bachelor and the Bobby-Soxer) wasn’t the right person to helm the film. In my opinion, Reis doesn’t take any risks and settles for conventional blocking techniques. The original 1946 Broadway production was directed by the great Elia Kazan (A Streetcar Named Desire and On the Waterfront), and I’m convinced that the celebrated Oscar-winning director would have done a much better job translating the famous stage play to the silver screen. 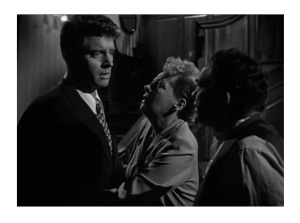 There’s nothing more frustrating than seeing good material fall short of its potential. Thankfully, Robinson and Lancaster’s excellent performances more than make up for the film’s flaws. Because he admired Miller’s play, Lancaster campaigned hard for the role of the son. While this character isn’t as well written as the character of the father, Lancaster is good at conveying moral outrage and disappointment.

All My Sons really to actor Robinson, who is brilliant as the unethical businessman. Most people remember Robinson as one of Warner Bros. studio’s “tough guys,” but I much prefer his 1940s output. Double Indemnity (1944), Key Largo (1948), House of Strangers (1949), etc., are all great examples of the actor’s extraordinary talents. Count Robinson’s father in All My Sons as one of the actor’s very best performances.

You guessed it! All My Sons isn’t one of my favorite stage-to-screen movie adaptations. Truth be told, I’m not a big fan of the play (I don’t think it is as good as Arthur Miller’s Death of a Salesman or The Crucible). But Miller’s story deals with many issues — business ethics, survivor’s guilt, etc. — that are still discussed today. Plus, the Robinson-Lancaster duo is way too interesting to pass up. B&W, 94 minutes, Not Rated.