Mousy Seymour Krelborn (Jonathan Haze, The Terror) is an amateur botanist who works in a third-rate flower shop. After inadvertently creating a strange-looking plant, Seymour becomes a local celebrity, but the new plant has an insatiable hunger for blood and the young man is forced to constantly feed it with human bodies.

Cheap. Tacky. Silly. Those are hardly the words one uses to describe a good film. But this legendarily low-budget (and influential) comedy-horror movie by Roger “The King of B-movies” Corman defies all expectations — despite its non-existent budget, The Little Shop of Horrors is a shockingly good and entertaining film. 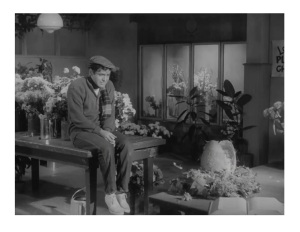 I’ve always been in awe of The Little Shop of Horrors. It was shot in 2½ days on a budget of approx. $30,000 and, quite frankly, it takes a lot of “chutzpah” to attempt to make a feature-length movie under such dire circumstances! It could easily have ended in disaster, but Corman and his team somehow managed to pull it off.

First and foremost, I enjoyed the fact that the film is filled with wonderfully quirky characters and hilarious subplots. This is one of those satires that demands multiple viewings — if you are paying too much attention to the plot, you may miss some of the funniest jokes. While I did love the deft satirical touch Jonathan Haze brings to his role as the pitiful Seymour, I thought the supporting cast provided the biggest laughs.

Best of all is a very young Jack Nicholson (One Flew Over the Cuckoo’s Nest) as a masochist who submits himself to endless and unnecessary dental procedures. Nicholson makes the most of his four-minute role. He is so assuredly funny — R.P. McMurphy, Jack Torrance and The Joker, all rolled into one character — that I’m still shocked that Nicholson had to wait almost ten years for Hollywood to notice him.

Incredibly, the dialogue, credited to writer Charles B. Griffith (Death Race 2000 and Eat My Dust), was largely improvised by the actors. I still can’t wrap my mind around the fact that a “poverty row” production unit managed to make a well-paced movie with so many characters and so many great jokes in just a few days!

Despite its mischievous sense of humor, The Little Shop of Horrors doesn’t forget that it is a horror movie at its core. The film has elements of classic horror movies like Frankenstein (1931), Invasion of the Body Snatchers (1956) and The Blob (1958). The ending is particularly mean-spirited — evil triumphs over good, and that, even in a black comedy, is unsettling to say the least.

Like Night of the Living Dead (1968), falling into public domain hell was perhaps the best thing that ever happened to the movie. I remember The Little Shop of Horrors being on TV all the time. As a kid, I always got excited every time the movie was on TV! For some reason, laughing at the film’s irreverent humor made me feel rebellious. This unpretentious Roger Corman cheapo is still great fun after all these years! It was later adapted into a hit stage musical. B&W, 72 minutes, Not Rated.