A shady businessman (John Hodiak, The Harvey Girls) and his sidekick (Wendell Corey, The File on Thelma Jordon) arrive in a small Arizona town on the same day a troubled teenager (Lizabeth Scott, Too Late for Tears) returns home from school. Hell breaks loose when the young woman falls in love with the racketeer.

“You are safe as long as I care what happens to me!”

Directed by Lewis Allen (The Uninvited) from a screenplay by A. I. Bezzerides (Thieves’ Highway) and Robert Rossen (All The King’s Men) based on the novel Desert Town by Ramona Stewart, Desert Fury might not be the kind of movie that one proudly displays on a resume, but it’s certainly an engaging mashup of melodrama and noir.

Desert Fury is noteworthy as one of the very few classic noirs filmed in color. The stylish Technicolor cinematography by Edward Cronjager (Beneath the 12-Mile Reef) and Charles Lang (How the West Was Won) is both gorgeous and off-putting — something this gloomy and sordid shouldn’t look so beautiful!

The glossy cinematography, together with composer Miklós Rózsa’s (Double Indemnity and The Lost Weekend) rousing and operatic music score, pushes some dramatic moments into camp territory. I’m not really complaining, though. Desert Fury is super-entertaining to watch if you don’t take it too seriously. 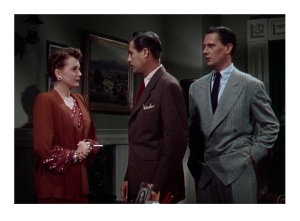 Most interesting is the odd relationship between the racketeer and his faithful henchman, played by John Hodiak and Wendell Corey, respectively. While it’s always difficult to determine original intent, I do have to agree with viewers who believe that the movie implies that the two criminals are lovers. The homoerotic vibe proves to be a welcome addition to a film that is otherwise hampered by a weak narrative.

Desert Fury is Burt Lancaster’s second film. It’s a bit of a shock to see that he has so little to do here. After making his acting debut with the sensational The Killers (1946), I was disappointed to see Lancaster in the thankless role of the amiable local sheriff (he is billed third, after Lizabeth Scott and Hodiak). Lancaster is fine, but he plays the least interesting character in the movie, not the kind of role for a newly-anointed movie star.

Oscar-winning actor May Astor (The Maltese Falcon and The Great Lie) walks away with the movie anyway. Astor plays Lizabeth Scott’s tough-as-nails mother, Fritzi Haller, a ruthless businesswoman who runs a gambling establishment. She is superb. The petite Astor managed to convince this viewer that she had the entire town under her thumb. Even nasty crooks Hodiak and Corey seem to be afraid of her!

Desert Fury isn’t a great film noir. The film is, in fact, closer to Peyton Place (1957) than to Out of the Past (1947) or The Lady from Shanghai (1947). However, I dare you not be entertained by the film’s offbeat characters and Technicolor hues. It has an excellent cast too. Desert Fury is a delicious piece of colored-candy that reveals a tangy center as it dissolves in your brain. Recommended. Color, 96 minutes, Not Rated.