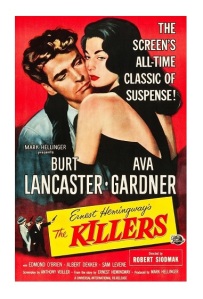 Two hired assassins arrive in a small town with the intention of killing a gas station employee nicknamed “The Swede” (Burt Lancaster, From Here to Eternity). After “Swede” is brutally murdered, a life insurance agent (Edmond O’Brien, The Wild Bunch) takes it upon himself to investigate the murder.

Legendary thriller that richly deserves its reputation as one of the best film noirs of all time. Bleak, cynical and twisty, The Killers perfectly balances style and content (it’s a visually striking movie with an assortment of compelling characters), while encapsulating post-war blues like no other film from the era. 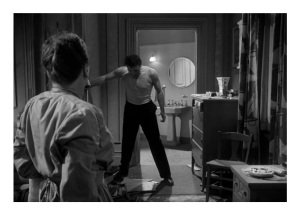 German emigre Robert Siodmak (The Spiral Staircase and The Crimson Pirate) masterfully directs a splendid script credited to Anthony Veiller (Stage Door and State of the Union) (with uncredited work by filmmakers John Huston, The Treasure of Sierra Madre, and Richard Brooks, Cat on a Hot Tin Roof).

It should be noted that the screenplay is based on a short story by Ernest Hemingway (The Old Man and the the Sea). The ten-page story is simple enough: Two hit men arrive in a sleepy town to kill an ex-pugilist. The screenwriters had the arduous task of imagining all the events that led to the killing of the man. Using a potpourri of snazzy flashbacks, The Killers tells a memorable tale of greed, lust, betrayal and murder. 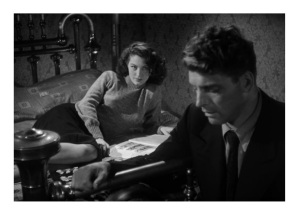 Like Orson Welles’s Citizen Kane, The Killers is told in a non-linear fashion. Granted, the fragmented narrative style wasn’t an original idea (in all fairness, Welles “stole” the idea from the 1933 movie The Power and the Glory, written by none other than Preston Sturges), but who cares? The Killers is an extremely suspenseful “whydunit” — the story is told in pieces, one stylish flashback at a time.

The atmospheric, semi-expressionist cinematography by Elwood Bredell (Phantom Lady) is sensational. The over-reliance on dark shadows makes you feel anxious, which is exactly the kind of emotion the film is trying to elicit from the audience. I particularly liked the use of an uninterrupted crane shot during the heist sequence — this is a truly exhilarating scene that has been imitated to death. 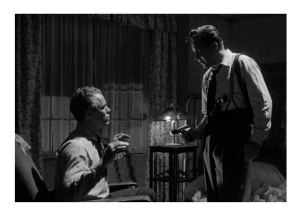 The Killers marked the Hollywood debut of Burt Lancaster. An ex-acrobat who never took acting lessons, Lancaster’s luminous screen presence dominates the movie. Because he always oozes intelligence, it takes a bit of an effort to accept Lancaster as a dimwitted ex-boxer. But the camera is clearly in love with him, so all is well in Denmark.

Ava Gardner (The Barefoot Contessa) is pretty extraordinary too. Gardner’s “femme fatale” is hard to digest precisely because she is so beautiful (perhaps foolishly, we tend to think that people’s insides should match their outsides). Edmond O’Brien, in his first film noir, is excellent as the insurance investigator. Character actors Charles McGraw (Richard Fleischer’s The Narrow Margin) and William Conrad (TV’s Cannon) play “the killers.” Sam Levene (Sweet Smell of Success) plays Lt. Sam Lubinsky.

If World War III erupts, this is one of the movies I’m taking into my bunker. Super-entertaining, raw and dazzling, I can’t recommend The Killers highly enough. Burt Lancaster is dynamite and Ava Gardner is so beautiful that it hurts the eyes. The supporting cast is fantastic too. If you’ve never seen it, you are missing out on a great film. Remade in 1964. B&W, 103 minutes, Not Rated.