Star-struck waitress Mary Evans (Constance Bennett, Topper) dreams of becoming a famous movie star. A chance meeting with acclaimed movie director Max Carey (Lowell Sherman, She Done Him Wrong) gives Mary the opportunity to fulfill her dreams. But Mary finds out that movie stardom isn’t as glamorous as it’s cracked up to be.

“Let me give you a tip about Hollywood. Always keep your sense of humor.”

Widely recognized as “the original A Star is Born” by both film scholars and movie buffs, the seemingly forgotten, fascinating Pre-Code melodrama What Price Hollywood? manages to set itself apart from its cinematic counterparts by deftly exploring Hollywood mythology in an unsentimental and sardonic manner. 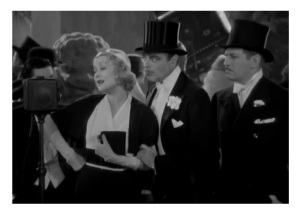 David O. Selznick (Rebecca) produced the movie, as well as the first A Star is Born, the 1937 film with Janet Gaynor and Fredric March. Although Selznick never acknowledged it, I find it hard to believe that the producer didn’t use What Price Hollywood? as a template for the 1937 movie — it’s just too coincidental for comfort.

But as I said before, What Price Hollywood? can be appreciated independently of its cinematic siblings. Directed by George Cukor (he also directed the 1954 version of A Star is Born, with Judy Garland and James Mason), the film does begin in familiar fashion: a famous Hollywood director (not an actor or a musician, like other versions of the story) turns a waitress into a movie star. This is where the similarities end.

For starters, the film is more comedy than drama — What Price Hollywood? uses a satirical tone to highlight the absurdities of Hollywood life. Being a Pre-Code production, the movie is also a tad naughty. For example, there is a reference to statutory rape and a joke made at the expense of an obviously gay woman.

In addition, in this version of the story, the mentor and protégé never become romantically involved. What Price Hollywood? tells two parallel stories — the rise of the actress and the decline of the movie director — that merge near the end of the film. Another point of interest is that the director’s chronic alcohol addiction has nothing to do with the actress’s stardom.

Finally, and this is by far the most interesting aspect of the film, What Price Hollywood? presents an ugly picture (no pun intended) of movie fandom. Usually, movies about movies try not to criticize people who idolize celebrities. That’s not the case here: fanboyism is mercilessly attacked throughout the entire movie.

There are really nice performances here. Lowell Sherman is excellent as the alcoholic filmmaker. Sherman also moonlighted as a director (e.g., Morning Glory), so I’m sure he understood his character well. I did think that the elegant Constance Bennett was miscast as the waitress — she’s much better after her character’s transformation. Neil Hamilton (Batman TV series) plays Bennett’s love interest!

What Price Hollywood? compares favorably with the more famous A Star is Born movies. In fact, I’ve enjoyed all five movies — 1932, 1937, 1954, 1976 and 2018 — and now I realize that I liked them for different reasons. That’s the great thing about these films; it’s interesting to see how the films reflect different sensibilities. What Price Hollywood? deserves far more attention than it has gotten. B&W, 88 minutes, Not Rated.