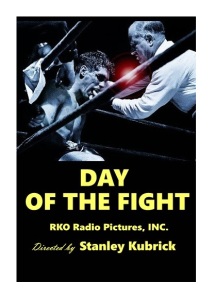 This mini-documentary showcases Irish-American middleweight boxer Walter Cartier as he prepares (mentally and physically) for a fight with Jamaica-born middleweight champion Bobby James. The fight took place on April 17, 1950.

Iconic filmmaker Stanley Kubrick made his entry into filmdom with this unassuming short-subject documentary about once-promising Bronx prizefighter Walter Cartier. Day of the Fight is nothing to brag about, but it does provide movie buffs with an opportunity to see Kubrick’s sensibilities in their rawest form. 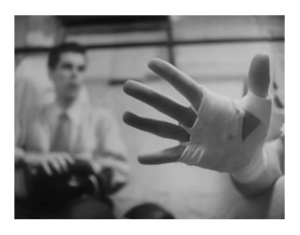 Kubrick was working as a photographer for Look Magazine when he was assigned to photograph Cartier. I’m not exactly sure what attracted him to the boxer’s story, but Kubrick decided to leave the magazine in order to concentrate on making this documentary about Cartier preparing for an upcoming fight.

According to Noman Kagan’s book The Cinema of Stanley Kubrick, the novice filmmaker financed Day of the Fight with his own savings ($3,900), and later sold it to RKO Radio Pictures for $4,000 (allegedly the largest sum of money the studio had ever paid for a short film). Apparently, RKO’s studio executives were so impressed with the reserved twenty-two-year-old Kubrick that they immediately offered the young filmmaker an opportunity to make another short documentary.

One thing to keep in mind while watching the movie: Kubrick was a self-taught photographer who never attended film school. The director claimed that he learned about filmmaking by watching lots of films at his local movie house (he once said that watching bad films gave him the confidence to make his own movies). Kubrick also read many books about film theory, specifically famed Russian film director Vsevolod Pudovkin’s influential 1929 book Film Technique and Film Acting.

For someone with no formal training, Kubrick demonstrates an innate ability to frame objects and people — there are some cool images here. The director also deserves praise for shooting the film in a way that instantly draws you into the story. More important, the 12-minute documentary hints at themes and ideas to come: dry narration (Barry Lyndon), hypermasculinity (Dr. Strangelove and Full Metal jacket), religious iconography (A Clockwork Orange and Eyes Wide Shut), etc.

As he became more famous as a filmmaker, Stanley Kubrick distanced himself from his early efforts. He did not need to be so self-conscious: Day of the Fight is a perfectly respectable first film. It’s clearly the main inspiration for Kubrick’s boxing drama Killer’s Kiss, one of the director’s first feature-length movies. Needless to say, a must-see movie for Kurbrick fans. P.S. You can watch it on YouTube. B&W, 12 minutes, Not Rated.