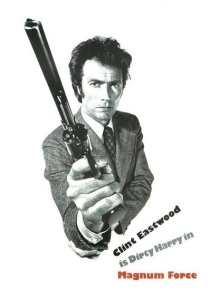 In San Francisco, California, someone is playing jury and executioner, murdering criminals who have evaded the law. It’s up to “Dirty Harry” Callahan (Clint Eastwood, Unforgiven) to find the killer/killers and bring him/them to justice.

“A man’s got to know his limitations.”

The second “Dirty Harry” Callahan movie isn’t your typical run-of-the-mill sequel. Magnum Force is similar to Dirty Harry but not quite the same. In fact, Magnum Force is one of the most intriguing (and oddest) movie sequels ever made.

Ever since it was released, back in 1971, Dirty Harry has been surrounded by controversy. Clint Eastwood’s cop Callahan was perceived by many viewers as a vigilante with a badge who had no qualms about ignoring people’s rights. Eastwood listened to the complaints and went out of his way to clarify his position on the character.

Eastwood explained: “The secret of the man I play is that he is a superhero, a dream character for most men. A guy sits in the audience. He’s scared stiff about his life. He wants to be that self sufficient legend he sees up on the screen in my pictures. A super human character who has all the answers, is doubly cool, exists without society, without anyone’s help. Of course, it will never happen that way.”

Having said his piece on Dirty Harry, Eastwood moved on. But after Warner Bros. convinced him to make a sequel to the 1971 blockbuster, Eastwood decided that the next film in the series would be used to vindicate Callahan. Magnum Force is fascinatingly self-conscious and super-meta — this is a movie whose main purpose is to put us at ease and make us feel comfortable with the controversial cop.

“I’m afraid you’ve misjudged me,” Callahan says. The scene almost breaks the fourth wall. Eastwood is clearly talking to the audience, something he continues to do throughout the entire film. In addition, Eastwood tries to humanize Callahan. We see him in his apartment relaxing after a tough day at work. We also see Callahan interact with lifelong friends. We even see him having a brief sexual encounter. All these scenes are designed to make Callahan more human, more likable.

Dirty Harry was also accused of racism, and Eastwood had a solution to that too — Callahan now has an African-American partner. Most interesting is how Eastwood addresses Callahan’s anti-establishment streak. In one pivotal moment, Callahan says, “I hate the goddamn system. But until someone has some changes that make sense, I’ll stick with it.” A curious statement from a man who refuses to follow orders.

The cynic in me thinks that this rebooting is nothing but a disingenuous attempt at damage control. I personally think that Eastwood is trying to have it both ways and this is exactly why I think Magnum Force is a bit of a head-scratcher. But Eastwood’s back-pedaling is genuinely interesting to watch (Eastwood being politically correct? Get out of here!), and by the end of Magnum Force, it all comes together — while it does lack the kinetic energy of its predecessor, the film is solid entertainment.

Anyhow, did I mention that the film has a great cast? Hal Holbrook (All the President’s Men) is terrific as Callahan’s boss. David Soul (TV’s Staysky and Hutch), Robert Urich (TV’s Spenser: For Hire), Tim Matheson (Up the Creek) and Kip Niven (Earthquake) appear as traffic cops. Margaret Avery (The Color Purple) plays a prostitute and Suzanne Somers (TV’s Three’s Company) has a bit part as a pool girl.

Clint Eastwood has said numerous times that Magnum Force is his favorite Dirty Harry movie. Since the film was an obviously personal project for the filmmaker, the movie is ripe for a deeper analysis on various levels. As we continue to reexamine policing in America, Magnum Force and the rest of the movies in the franchise have acquired greater relevance. I’m afraid we will continue to debate the pros/cons of “Dirty Harry” and this isn’t necessarily a bad thing. Color, 124 minutes, Rated R.