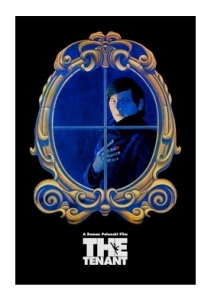 In Paris, France, a meekly Polish man (filmmaker Roman Polanski, Chinatown) rents an apartment in an old building where its inhabitants make his life miserable. The constant hostility takes a toll on the emotionally-fragile immigrant.

This is one helluva creepy movie. Director Roman Polanski, master of psychological horror, has pulled out all the stops to unnerve moviegoers. Better than that, The Tenant is loaded with sociopolitical messages: this is the ultimate study of cultural alienation. The Tenant forces the audience to look closely at issues like isolation, xenophobia, ethnocentrism, conformism, loneliness, suspicion and paranoia. 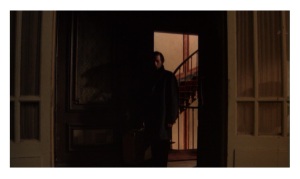 The Tenant (aka Le Locataire) is the third (and last) of Polanski’s so-called “apartment trilogy” — Repulsion (1965) and Rosemary’s Baby (1968) are the other two (some people have included Polanski’s 2011 drama Carnage in the group). All these films revolve around people confronting real or imaginary terrors inside an apartment.

Based on Roland Topor’s 1964 novel of the same name, The Tenant is perhaps Polanki’s scariest, most complex and personal movie to date. Since he isn’t really an actor, Polanski’s presence is a clear indicator that this was a very personal project for the filmmaker. After his Polish-Jewish parents were sent to concentration camps, Polanski survived the Nazi-invasion of Poland hidden in various foster homes. Also, the director has spent most of his adult life in France, where he was born.

I only bring this up because the film is at its core the story of a lonely immigrant who is made to feel like an outsider, something Polanski experienced first-hand. While much of what the viewers see is a product of the protagonist’s mental deterioration, the main character does suffer a great deal of rejection. The residents of the apartment building repeatedly allude to the tenant’s Polish background and their constant harassment of the poor guy means one thing, and one thing only: “assimilate or perish.”

The Tenant also throws arrows at the idea of passiveness in the face of oppression. In one intriguing sequence, Polanski’s character is instructed by a co-worker to stand up and fight for his rights. As I watched the scene, I kept wondering if this conversation was about the tenant and his neighbors or about Polanski’s life in Nazi-occupied Poland — the movie keeps blurring the lines between the director’s life and fiction.

The vast majority of the film takes place indoors and Sven Nykvist’s (Cries and Whispers and Fanny and Alexander) camera work conveys isolation and claustrophobia beautifully. Philippe Sarde’s (Ghost Story) eerie music score is excellent too. The shocking ending, which can be interpreted in many different ways, is spooky as hell!; a blood-curdling moment ala Invasion of Body Snatchers (1978).

Polanski went to great lengths to cast the right actor for each role. Isabelle Adjani’s (The Story of Adele H.) role seems like a bit of window dressing, but the rest of the cast is outstanding. Melvyn Douglas (Hud and Being There) plays the overly-strict landlord and Jo Van Fleet (East of Eden) is a troublesome tenant. Lila Kedrova (Zorba The Greek) plays the mother of a disabled child who is also harassed by her neighbors (another example of bullying people perceived as weak).

The great Shelley Winters (The Diary of Anne Frank) plays the frosty “Le Concierge” (aka apartment building manager). It’s a small but very interesting role. I must say that few actors are as good as Winters when she’s nasty. She infuses her character with an almost unbearable amount of aloofness. Winters’s chilling contempt for Polanski’s character has a hint of antisemitism that is both despicable and unsettling — a fine example of what a great actor can do with limited screen time.

The Tenant is the last movie Polanski made before his notorious sex scandal. For whatever reason, Polanski’s post-scandal movies lack the the raw temerity of his early work. Maybe he became too self-conscious, or maybe he simply decided to try something different. I don’t really know. Ominous, disturbing and in the end quite sad, this extraordinarily well-crafted psychological thriller also manages to say something important about identity and alienation in modern society. Color, 126 minutes, Rated R.

This is my contribution to The Shelley Winters Blogathon, hosted by Poppity Talks Classic Film and Realweegiemidget Reviews.