“Last night I dreamt I went to Manderley again.”

Alfred Hitchcock’s first American movie is extraordinary in every aspect. Although in later years Hitchcock dismissed the film as a mere “picturization of a novelette,” Rebecca remains one of the director’s best, if least personal, movies. The film is also one of the Master of Suspense’s most interesting ventures.

Adapted from Daphne du Maurier’s novel and produced independently by David O. Selznick (Gone with the Wind), Rebecca is every bit as good as its reputation suggests. The film excels as a psychological thriller, as a character study, as a Gothic romance. It’s moody, fascinating and entertaining all at once. This is all the more incredible considering the film’s behind-the-scenes problems.

According to Leonard J. Leff’s book Hitchcock & Selznick, Selznick ordered Hitchcock to stick close to the book. Hitchcock apparently fought like a titan to put his personal stamp on the material, tweaking things here and there. Selznick didn’t appreciate the director’s idiosyncrasies and told him, “we bought Rebecca and we intend to make Rebecca.” Producer and director also tussled over casting, sets, camera set-ups, editing, etc. 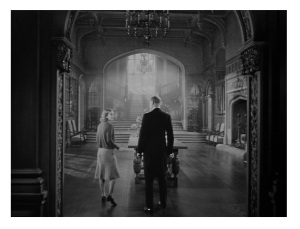 Hitchcock was so frustrated with Selznick’s micromanagement that I don’t think he realized du Maurier’s narrative is very “Hitchcockian.” And the book influenced Hitchcock in profound ways; he took some of author’s themes and made them his own.

Whether he was willing to admit it or not, Rebecca fits nicely into Hitchcock’s filmography: the juxtaposition of opposites (The Shadow of a Doubt and Strangers on a Train), the dead influencing the living (The Trouble with Harry and Psycho), unhealthy obsession (Vertigo and Marnie), etc., they’re all elements that can be found in both du Maurier’s story and Hitchcock’s movies.

Rebecca doesn’t contain the spectacular visuals that we’ve come to expect from the Master of Suspense and that’s okay. Hitchcock effectively suggests all sorts of complex ideas and emotions with a minimum of film wizardry.

Rebecca does lose momentum after the big revelation — the protracted inquest brings the movie to a halt. It’s a minor thing that doesn’t distract from the quality of the movie. The goodies cancel out the narrative’s flaws. Particularly noteworthy is George Barnes’s superb, Oscar-winning chiaroscuro cinematography. I also loved the visual effects — the sprawling mansion was created using miniatures and matte paintings.

Hitchcock allegedly called actors “cattle,” but he always managed to inspire actors to do their best. Hitchcock got an extraordinary performance out of Joan Fontaine, in my humble opinion not a high caliber actress. Fontaine gives a stunning performance — you can sense her anxiety throughout the entire film.

Laurence Olivier is also great as the film’s mercurial anti-hero. However, Judith Anderson (Cat on a Hot Tin Roof) gives by far my favorite performance in the movie. Anderson’s Mrs. Danvers, Rebecca’s overly devoted housekeeper (a character with both homoerotic and homophobic shadings), is one of Hitchcock’s most interesting antagonists. The fantastic cast also includes George Sanders (All About Eve) as Rebecca’s dastardly cousin and Florence Bates (The Devil and Miss Jones) as an American dowager.

“(Rebecca) has stood up quite well over the years. I don’t know why,” Hitchcock said later. I do know why. Haunting and kind of weird, Rebecca manages to convey brilliantly what it is to be an outsider, something that most of us have experienced at one point or another in our lives. Shrewdly directed, sharply written and flawlessly performed, Rebecca is one of Hitch’s most satisfying thrillers. B&W, 130 minutes, Not Rated.