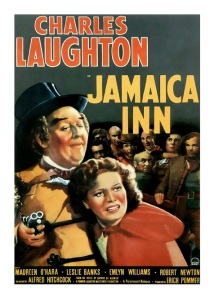 In Cornwall, England, during the first half of the 19th century, a young Irish woman, Mary (Maureen O’Hara, The Black Swan), slowly realizes that her aunt’s husband (Leslie Banks, The Man Who Knew Too Much) is behind a series of mysterious shipwrecks. Mary requests the help of the local squire, Humphrey Pengallan (Charles Laughton, Hobson’s Choice), unaware that the urbane and well-respected Pengallan is involved in her uncle’s criminal activities.

“We got away from Jamaica inn last night… I think it’s nothing better than a den of smugglers!”

Jamaica Inn is considered lesser Alfred Hitchcock. The film’s biggest critic was Hitchcock himself. He didn’t enjoy making the film and didn’t think the movie was entirely successful. Audiences, however, disagreed with the filmmaker — Jamaica Inn was one of Hitchcock’s biggest moneymakers.

Jamaica Inn is an adaptation of Daphne du Maurier’s well-regarded 1936 novel of the same name. Hitchcock had already signed the contract that brought him to Hollywood and was already packing when he realized that he had enough time to make another film before leaving for America. A script was quickly prepared and the director agreed to make the film only to regret his decision years later.

Actor Charles Laughton was Hitchcock’s main source of irritation. Because Laughton was one of the producers, Hitchcock felt a bit powerless. According to Patrick McGilligan’s book Alfred Hitchcock: A Life in Darkness and Light, Laughton pulled rank and enlarged his role against Hitchcock’s wishes. Laughton also changed his character from a clergyman to a foppish squire, an idea first proposed by co-producer Erich Pommer. Although Hitchcock was friends with Laughton, all these changes irritated him.

Never mind, Laughton manages to deliver a delightfully eccentric performance. He is mannered, shamelessly hammy, but I thought it worked within the context of the movie — he’s one of Hitchcock’s most interesting villains. The colorful cast includes Robert Newton (Oliver Twist), Mervyn Johns (Dead of Night) and Emlyn Williams (Another Man’s Poison). Maureen O’Hara is excellent as Mary. O’Hara is only a teenager, but she holds her own against Laughton, Newton, and the rest of the cast.

Aside from the excellent performances, Jamaica Inn offers many scintillating trinkets. Although Hitchcock dismissed the film as “an absurd thing to undertake,” I found Jamaica Inn fascinatingly Hitchcockian. As expected, the director enhances the narrative by placing contrasting ideas next to each other. Jamaica Inn is a great example of Hitch’s belief that “opposites create interesting sparks.”

Novelist du Maurier was responsible for the story, but Hitchcock took the author’s premise and accentuated the things that interested him the most. For example, Hitchcock does a great job suggesting that the film’s two main locations — squire’s opulent mansion and the rundown tavern — are two sides of the same coin.

Jamaica Inn also deals with more than a few Hitchcock phobias. The distrust of government officials, the idea that things aren’t always what they seem, people pretending to be what they are not, different types of unhealthy obsessions, etc., all recurring motifs and symbols that pop up in Hitchcock’s films.

Jamaica Inn is extremely well-done, entertaining, even interesting. The film has this ebullient pace that makes time fly by. Jamaica Inn moves swiftly from scene to scene — the action never stops. Hitchcock always said that he never quite understood period pieces, but this film is evidence that he did know a thing or two about how to generate excitement in a costume movie. I think Jamaica Inn is one of the master’s most underrated movies. B&W, 108 minutes, Not Rated.

This is my contribution to The Third Annual Alfred Hitchcock Blogathon, hosted by Maddy at Maddy Loves Her Classic Films