Private eye Philip Marlowe (Dick Powell, The Bad and the Beautiful) is hired by an ex-con, Moose Malloy (Mike Mazurki, Some Like it Hot), to find the man’s old flame. This seemingly simple task pulls Marlowe into a world of deceit and murder.

Based on Raymond Chandler’s 1940 novel Farewell, My Lovely, Murder, My Sweet is the movie that introduced hard-boiled gumshoe Philip Marlowe to moviegoers — it’s still one of the best Marlowe movies and one of the best film noirs of the era.

Murder, My Sweet doesn’t make much sense. I haven’t read the book so I’m not sure who should be blamed for the convoluted narrative. The funny thing is that you don’t really notice anything wrong with the story until you sit down and think about it and that’s a good thing — the plot holes don’t prevent you from enjoying the movie.

Edward Dmytryk (The Caine Mutiny) directs with panache and imagination, and the script by John Paxton (Crossfire), despite some lapses in logic, is really tight and has some great lines (my favorite: “my mind felt like a plumbers handkerchief”). Harry J. Wild’s (The Big Steal) black and white cinematography is pretty snazzy — there are so many scenes that are just plain gorgeous, darkly gorgeous. 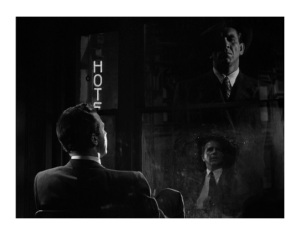 Humphrey Bogart is the actor most associated with Marlowe (he played the character in the 1946 classic The Big Sleep), but Dick Powell is excellent as the L.A. detective. Powell is 100% believable as the sardonic Marlowe. I liked the fact that he plays Marlowe as an average man. He isn’t dumb, but he ain’t Sherlock Holmes either.

Marlowe is our guide to this bizarre journey through the underbelly of American society, but he is never ahead of us — sharp viewers will be able to decode the mystery way before Marlowe does. Powell clearly doesn’t have Bogie’s magnetism, but his Malowe is grounded in reality and that makes him very relatable. 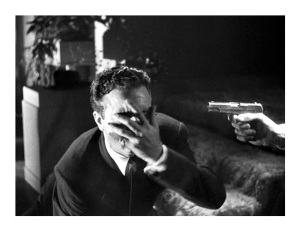 Claire Trevor (Key Largo) is sensational as the film’s femme fatale. Powell is the star of the movie, but it is Trevor who has the most difficult task here; the film works because Trevor takes an overused noir trope and makes it look new and fresh.

Character actor Mike Mazurki is perfect as the dim-witted Moose. Otto Kruger (High Noon) is deliciously evil as the he proverbial “snake oil salesman.” Anne Shirley (Stella Dallas), in her last film role, is overshadowed by her charismatic co-stars.

Murder, My Sweet has a happy ending that seems a bit incongruous with what came before it, but the rest of the movie is fantastic. It isn’t my favorite Marlowe movie — I much prefer Hawks’s The Big Sleep and Robert Altman’s The Long Goodbye — but it’s definitively a classic noir. B&W, 95 minutes, Not Rated.