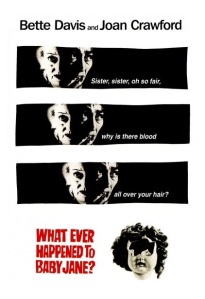 “You mean, all this time, we could have been friends?”

What Ever Happened to Baby Jane? is a delicious piece of Grand Guignol laced with gallons of black humor. The movie is also influential; the film is credited with the invention of the “hagsploitation” sub-genre, which consisted of older women placed in perilous situations. Still frowned upon by most critics, What Ever Happened to Baby Jane? has aged better than many so-called prestigious movies — it’s a fascinating, well-crafted thriller that deserves its classic status.

The film’s background story is nearly as interesting as the film itself (Ryan Murphy’s 2017 TV mini-series, Feud, does a commendable job explaining the behind-the-scenes drama). For the uninitiated, Joan Crawford instructed Bette Davis to read the novel What Ever Happened to Baby Jane? by Henry Farrell as a possible vehicle for them to work together. Davis’s response to Crawford’s suggestion is unprintable, but Davis did read the book eventually and concluded that it had movie potential.

At this point in their careers, neither Davis nor Crawford were bankable stars, so producer-director Robert Aldrich (Kiss Me Deadly and The Dirty Dozen) had a hell of a time finding financial support. Seven Arts Productions agreed to put up the money, but the movie was considered a huge gamble. The rest is history, and the end result is a disturbing, no-holds-barred, perverse film about the dark side of the world of show business. What Ever Happened to Baby Jane? was a smash hit, reviving the moribund careers of Davis and Crawford.

Although long and methodical paced, What Ever Happened to Baby Jane? generates considerable suspense that is sustained all the way to its shattering conclusion. Director Aldrich directs (or more accurately referees) with clinical precision (the film was shot and edited in an efficient and economical manner) and the movie packs an emotional wallop. What Ever Happened to Baby Jane? also contains one of my all-time favorite twist endings; it makes you rethink the entire movie.

This was a tour-de-force for its stars. From the moment they make their respective entrances, both actresses make clear why they have achieved legendary status. As the delusional, emotionally unstable ex-child star Baby Jane, Davis gives a formidable grotesque and convincing performance (I love how Davis slaps her sandals as she walks back and forth from room to room). Crawford wisely underplays her role, giving Davis something to act with and against. Davis has the showiest role, but Crawford is brilliant in her own quieter way. Making his film debut, Victor Buono (Robin and the 7 Hoods) is pretty fantastic too as the mama’s boy caught in Jane’s web of craziness.

Despite the relatively small budget, the movie looks great. Ernest Haller’s (Jezebel) atmospheric, Oscar-nominated camera work relies heavily on the expert use of shadows and lights. As the story moves from black comedy and film noir to ghoulish Grand Guignol, Haller helps create many memorable, purely visual moments. The scene in which Davis discovers her reflection in the mirror, only to realize what an old harridan she has become, is an example of Haller’s excellent work.

I also want to mention the sets, costumes, and soundtrack. The decrepit mansion in which the sisters live is an overdressed relic that insinuates decay in an old Hollywood style. Norma Koch (Lady Sings the Blues) won an Oscar for her costumes. Finally, Frank DeVol’s (The Flight of the Phoenix and The Dirty Dozen) heart pounding and chilling musical score comes across strongly without obstructing the dialogue.

What Ever Happened to Baby Jane? will certainly delight those movie buffs who appreciate great thrillers. The Davis-Crawford combo is simply irresistible. For those moviegoers who don’t understand what a real “star” is, here is a double dosage of the real thing. Remade (poorly) in 1991, with Vanessa Redgrave and Lynn Redgrave as the Hudson sisters. B&W, 132 minutes, Not Rated.