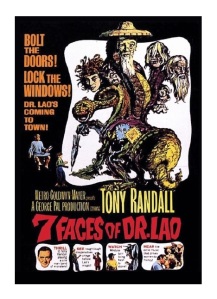 “My specialty is wisdom. Do you know what wisdom is?”

“The Greatest Show on Earth,” George Pal style. 7 Faces of Dr. Lao is a marvelous piece of magic-realism; an affectionate, wondrous pastiche of western motifs, comedy and fantasy. The film also works as a fairy tale for adults and children alike.

7 Faces of Dr. Lao is an adaptation by Charles Beaumont (The Wonderful World of the Brothers Grimm) and Ben Hecht (Wuthering Heights and Notorious) of the 1935 fantasy novel The Circus of Dr. Lao by Charles G. Finney. Producer Pal decided to direct the film himself — he did a great job sewing all the film elements together.

“The whole world is a circus if you look at it the right way,” says the wise Dr. Lao. At its heart, 7 Faces of Dr. Lao is a metaphor-ridden morality tale. Each circus attraction is designed to make an observation about the human condition. The film’s moral universe is predicated on the idea that awareness leads to change and happiness. Despite being a morality tale, the lessons don’t interfere with the fun.

7 Faces of Dr. Lao is a tour-de-force for actor Tony Randall. He plays eight roles — seven plus a cameo — and he is just marvelous. Randall’s Lao is a particularly cunning characterization. Lao is shrewd, but very ornery. I loved how he deliberately drops his cliché Chinese accent throughout the movie, cleverly conveying the idea that people are easily manipulated when you play with their expectations.

But Randall’s great performance couldn’t have been accomplished without the then state-of-the-art make-up effects created by William Tuttle (The Time Machine). He received an honorary Oscar for his groundbreaking work (the first Oscar ever for make-up). The special visual effects, which consist mostly of stop-motion model animation, are lots of fun too — they will remind you of the work of stop-motion master Ray Harryhausen (20 Million Miles to Earth, The 7th Voyage of Sinbad, etc.)

Randall’s performance and Tuttle’s make-up are the raison d’etre to watch the film, but the rest of the cast is pretty great too. Barbara Eden (TV’s I Dream of Jeannie) plays Angela Benedict, the widowed Librarian, and John Ericson (Bad Day at Black Rock) is Ed Cunningham, the Crusading Publisher. Scene-stealers Arthur O’Connell (Pocketful of Miracles), Noah Beery Jr. (TV’s The Rockford Files), John Qualen (A Patch of Blue) and Lee Patrick (Now, Voyager) also appear in key supporting roles.

7 Faces of Dr. Lao is charming, wise and funny. The film doesn’t necessarily push the envelope of fantasy, but its satirical tone and irreverent attitude have an ageless quality. All in all, it’s a helluva fun ride — step inside Dr. Lao’s magical circus tent, you won’t regret it! Color, 100 minutes, Not Rated.