In Canada, a wealthy landowner (Walter Pidgeon, Mrs. Miniver) hires an orphan (Gilles Payant) to take care of his prized dog, an Irish Setter named “Red.” The child and dog form a strong bond to the bewilderment of the dog’s emotionally aloof owner.

Eclipsed somewhat by Old Yeller and Greyfriars Bobby: The True Story of a Dog, Disney’s Big Red deserves to be showered with praise; this is an enjoyably old-fashioned family movie, a must for Disney fans and animal lovers. 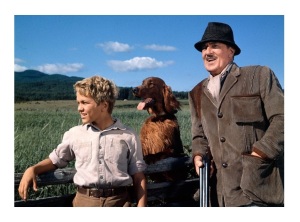 Based upon the novel by Jim Kjelgaard, Big Red is an endearing little film about a boy, a dog and the affluent curmudgeon who learns a few important life lessons from both the child and the four-legged creature. It’s all done in the most unpretentious manner. It’s probably a bit too simple — the film could have used a bit more conflict — but I still think this is a very charming movie.

One thing that can be said in defense of Big Red is that it is less manipulative than most movies of this type. The emotions are there, but the film doesn’t ram them down our throats. Walter Pidgeon’s unemotional performance is used effectively to prevent the film from ever becoming too cloy.

Norman Tokar, whose career consists mostly of Disney productions (The Happiest Millionaire, The Apple Dumpling Gang, etc.) made his film debut here. Tokar lets the story unfold without fancy bells and whistles. Big Red is charmingly shapeless, like an unadorned slice of life. The beautiful scenery — it’s a very outdoorsy film — is a big plus (it was shot mostly inside the San Bernardino National Forest, California).

Although the Irish Setter is a gorgeous-looking creature, Big Red really belongs to Gilles Payant, a local Canadian boy whose first and only film was this one. The film works because Payant is so natural; there is nothing artificial about his performance. He also has great chemistry with veteran Canadian actor Pidgeon.

Big Red is no Old Yeller, but it is a nice dog movie — “Red” deserves a place in the canine hall of fame. The film is for people who love animals and the outdoors. The Sherman Brothers (May Poppins) wrote the main song. The incidental music was written by Oliver Wallace (The Incredible Journey). Color, 91 minutes, Rated G.