At the height of WWI, British officials send three spies (John Gielgud, Arthur, Madeline Carroll, The 39 Steps, and Peter Lorre, M) to assassinate an unidentified German spy, but the assignment turns out to be more difficult than initially thought.

After back-to-back critical and commercial hits, The Man Who Knew Too Much (1934) and The 39 Steps (1935), director Alfred Hitchcock’s career faced a momentary setback: Secret Agent left lots of people dissatisfied. Reviews were lukewarm and ticket sales were disappointing. Today, Secret Agent is still treated with indifference, but I rather enjoyed it — it’s one of the Master of Suspense’s oddest thrillers.

Based on a couple of short stories by acclaimed British playwright and novelist W. Somerset Maugham (Of Human Bondage and The Razor’s Edge), adapted into a screenplay by Charles Bennett (Cecil B. DeMille’s Unconquered and Voyage to the Bottom of the Sea), the downbeat Secret Agent deals more or less with the ethics of espionage — Hitchcock shows us here the nasty side of the counterintelligence world.

This unglamorous thriller is the antithesis of Ian Fleming’s super-cool 007 adventures. Secret Agent is a dark movie, very much anticipating author John le Carré’s (The Spy Who Came in from the Cold and Tinker Tailor Soldier Spy) somber depiction of black operations. Hitchcock is hell-bent on demonstrating that governments achieve peace through nefarious methods — though sausage-making is ugly, the work is necessary. 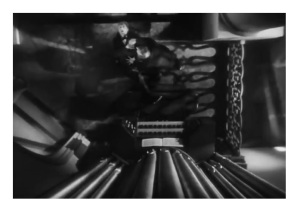 The story is told from the perspective of a group of spies, each one with distinctly different personalities. Sir John Gielgud is a world-weary soldier who’s reluctant to kill. Madeline Carroll plays Elsa, a overly-enthusiastic spy who’s in love with the idea of espionage, not with its implementation. Peter Lorre is a ruthless assassin who enjoys his job a little too much. It’s the trio’s idiosyncrasies that form the crux of the film.

Hitchcock apparently encouraged the actors to play themselves. Stage actor Gielgud, who wasn’t comfortable with the film process, looks “ill-at-ease” throughout the entire movie, which is exactly right for his indecisive character. Carroll injects her own gregarious personality into her character. Lorre was a hopeless drug addict at the time of filming — an unhinged actor playing an unhinged assassin. American actor Robert Young (The Enchanted Cottage) plays, you guessed it, a laid-back American. 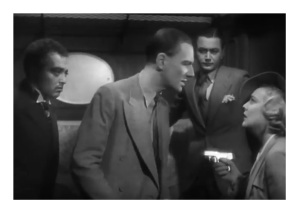 As expected from a Hitchcock production, there are a few wonderful set-pieces. The “assassination sequence” is very suspenseful. Hitchcock effectively creates tension by building the sequence using a series of short shots.

There’s also a chase sequence inside a huge chocolate factory that’s both odd and exhilarating. Secret Agent ends with a nasty trainwreck, which was done on a small budget, using judicious editing, lots of clever camera angles and goofy miniature work — it shouldn’t have worked but it did. And, as expected, naughty Hitchcock finds a way to incorporate (very black) humor into many serious situations.

Alfred Hitchcock was proud of Secret Agent, but kind of regretted making it. In the famous 1962 interview conducted by Francois Truffaut, Hitchcock explained that the film wasn’t a success because (I’m paraphrasing here) “people don’t want to see a hero who doesn’t want to be a hero.” I think that’s precisely what makes the movie so interesting. It’s an in-depth exploration of the psychological toll of espionage work, a subject matter that has remained timeless. B&W, 85 minutes, Not Rated.