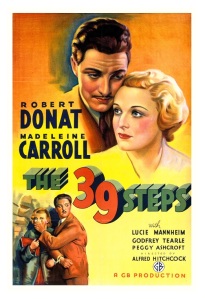 Tourist Richard Hannay (Robert Donat, Goodbye Mr. Chips) is drawn into a complicated web of international intrigue after he meets a mysterious woman at a music hall. When the woman in question is murdered, Hannay becomes the police’s prime suspect — he must elude the authorities while looking for the real killer.

Producer Michael Balcon lured Alfred Hitchcock into signing an exclusive contract with the promise of total artistic freedom. Balcon kept his promise and Hitchcock began perfecting his brand. The Man Who Knew Too Much (1934) was the first film under Hitchcock’s new contract. Invigorated by the critical and commercial success of the 1934 thriller, Hitchcock enthusiastically dove into The 39 Steps, the second and perhaps best of the six movies he made for Balcon — it’s still one of the director’s best films.

The 39 Steps is an  adaptation of John Buchan’s 1915 novel of the same name, but book and film are very different. I read the novel in high school — I remember enjoying it a great deal — and the book takes place during the early years of World War I.

Hitchcock loved Buachan’s story (he was a fan of the author), but decided to update it to 1930s England. He took some key ideas from the book and discarded the rest. In the process, the director created the template for the modern action movie. Robert Towne, the Oscar-winning writer of the 1974 classic Chinatown, once said of the movie, “… all contemporary escapist entertainment begins with The 39 Steps.”

Towne wasn’t exaggerating. Everything from Indian Jones and James Bond to Romancing the Stone, Die Hard, The Fugitive, and even Taken, they all seem to have things in common with The 39 Steps.

Although Hitchcock and Buchanan are credited for creating the blueprint for today’s action movie, The 39 Steps is clearly indebted to Homer’s epic poem The Odyssey. Like Homer’s hero Odysseus, Robert Donat’s Hannay embarks on a long, episodic journey that restores order (both Hannay and Odysseus assume various identities).

The 39 Steps and Odyssey also share a major theme: “nothing-is-as-it-seems.” The idea of “appearance vs. reality” is not only an integral part of both Hitch’s movie and Homer’s poem, but also a recurring theme in action films. Action heroes typically discover extraordinary things hidden behind the mundane facade of the everyday.

The 39 Steps is a pastiche of thrilling adventures, each of which are purposefully written (by Charles Bennett and Ian Hay) in different styles. It’s almost as if you are watching a compilation of short stories connected by one character. I also liked how the film’s final scenes mirror the beginning directly — the story comes full circle. 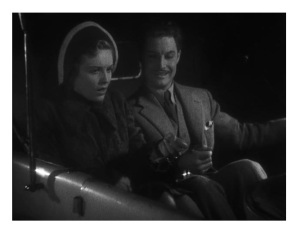 My favorite segment is the one devoted to the woman living in the country with her pious husband. The wife is played beautifully by Dame Peggy Ashcroft (A Passage to India). It’s a poetic, lyrical vignette. Madeleine Carroll’s character arrives — she plays Donat’s unwilling partner — and the story quickly moves into screwball comedy territory, but the transition is so well-done that you don’t mind the change in tone.

Actors Robert Donat and Carroll (the first official Hitchcock Blonde) snap at each other hilariously. Donat tries unsuccessfully to convince Carroll that he had been wrongly accused of murder. Humor doesn’t replace suspense, though. This is a great example of how to combine a series of emotions — love, fear, anguish, laughter — in a seamless fashion. The movie’s ending is clever and suspenseful.

From beginning to end The 39 Steps is an offbeat, fun movie. The film is a collage of entertaining set pieces. There are many thrilling moments along the way. You really become engaged in the story and the characters. The only criticism that I would have is that the movie is too short. B&W, 90 minutes, Not Rated. 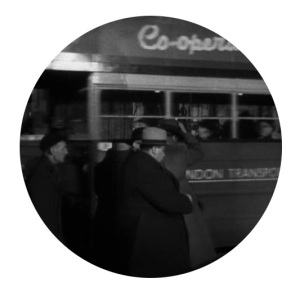