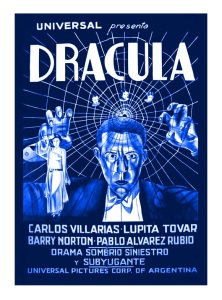 A mysterious Transylvanian aristocrat, Count Drácula (Carlos Villarias), moves to London, England. Drácula is really a blood-thirty vampire who begins to terrorize the city. An intrepid intellectual, Professor Van Helsing (Eduardo Arozamena), is determined to stop Drácula at any cost.

Silent films were a truly international product. Film distributors simply had to substitute the language of intertitles. The invention of sound created an unforeseen problem for Hollywood; how do you sell American movies to non-English speaking countries? Early sound films couldn’t be dubbed (the technology wasn’t there yet), so major movie studios came up with an interesting alternative: they decided to produce foreign-language versions of their films using the same script, sets, costumes, etc., but different actors who could speak the country’s native language. 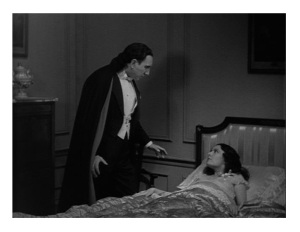 Meant for the Latin-American market, this Spanish-language Drácula was shot at night while its 1931 English-speaking sibling was shot during the day. The film was thought to have been lost, but a copy was found in the 1970s. Now fully restored, we can all compare both versions. A growing group of movie buffs insist that the Spanish movie is better than the English-speaking production but I beg to differ — I watched them back to back and I still think Bela Lugosi’s movie is superior.

Director George Melford allegedly kept an eye on the progress of the English-speaking movie and tried to do better. I agree that some camera setups are better. The cinematography is more fluid, which puts to bed the long-held view that early sound films were restricted by the then new technical discovery. But are camera calisthenics inherently superior to static camera setups? Unless you believe Michael Bay’s movies are better than Stanley Kubrick’s, that’s not necessarily true.

That being said, some additional scenes should have been part of the Lugosi movie. You get to see Dracula emerging from his coffin. You also see vampire bite marks. The women wear more provocative costumes (contrary to popular belief, it seems that Americans were/are more prudish than Latinos!). These are pretty cool things to see.

The movie, however, tends to drag on and on — it’s 34 minutes longer than Lugosi’s film! — and the much-anticipated confrontation between Drácula and Van Helsing is poorly shot and edited. I have no idea why this pivotal scene is broken down into small pieces. It demonstrates why film editing is important in cinema. This important moment has been reduced to something flaccid and ordinary. 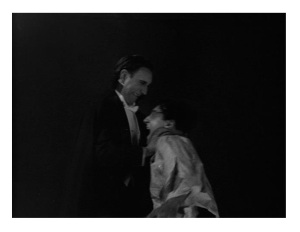 Above all, Carlos Villarias’s lack of “oomph” nearly ruined the movie for me. Villarias doesn’t have Lugosi’s creepy elegance and mysterious charisma. Frankly, Villarias is by far the worst Count Dracula I’ve seen (so far). To put it mildly, he was simply miscasted. It just shows you how much we have taken Lugosi’s work for granted!

I did like the supporting cast. Eduardo Arozamena is a spunky Van Helsing. Pablo Alvarez Rubio chews up the scenery as Renfield. My favorite was Mexican actress Lupita Tovar (mother of actress Susan Kohner, Imitation of Life, grandmother of filmmakers Paul Weitz and Chris Weitz, American Pie) as Eva/Mina. She’s very photogenic and it surprises me that Hollywood didn’t grab her — she has star quality!

What makes a movie great? The question has haunted moviegoers since the creation of cinema. From a technical standpoint, the Spanish-language Drácula feels more modern, but without Lugosi’s awesome performance this movie kinda sucks (no pun intended). Old Bela died destitute and forgotten, but he had the last laugh — his Count remains unbeatable. B&W, 105 minutes, Not Rated.