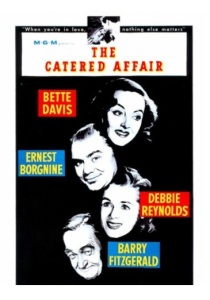 A young woman (Debbie Reynolds, Singin’ in the Rain) tells her working-class parents (Bette Davis and Ernest Borgnine, The Wild Bunch) that she’s getting married and the mother begins preparing a huge wedding that no one seems to want.

“You’re going to have a big wedding whether you like it or not!”

This Metro-Goldwyn-Mayer production was directed by Richard Brooks (Elmer Gantry) from a screenplay by playwright Gore Vidal (The Best Man) based on a TV play by Paddy Chayefsky (Marty and Network).

The Catered Affair touches upon many timeless “kitchen-table” issues. The film has the same endearing unpretentiousness as Chayefsky’s 1955 Oscar-winning classic Marty — both movies are about the big problems of ordinary folks.

The dialogue is sharp and funny. Like Vincente Minnelli’s Father of the Bride (1950) and more recently Paul Feig’s Bridesmaids (2011), The Catered Affair pokes fun at Americans’ obsession with weddings. Looking at the film from today’s perspective, it seems to me that the whole wedding thing hasn’t changed much in sixty plus years (well, the prices have gone up!). The movie also explores, incisively yet with delicacy, the idea of parents living vicariously through their kids.

From a technical standpoint, The Catered Affair does an outstanding job. The staging and blocking in the movie is unexpectedly imaginative. Director Brooks and cameraman John Alton’s (An American in Paris) play a visual chess board game with the actors. The movie takes place mostly in small spaces, but it never becomes stagnant or boring.

A very young Debbie Reynolds gives a surprisingly naturalistic performance. It was her first dramatic role and she holds her own against some stiff competition. Ernest Borgnine is perfect as the taxi driver father. Barry Fitzgerald (Going My Way), in one of his last screen roles, provides fine comic relief as Davis’s brother. Rod Taylor (The Time Machine and The Birds) plays Reynolds’s soon-to-be-husband.

And then there is Bette Davis, who fights like a titan to make viewers believe that she’s an ordinary blue-collar housewife. Although she is actressy in places (the Bronx accent is a bit overdone), there is no denying that it is a stunning change-of-pace. Davis has one “breakdown scene” that’s a beauty. I watched this right after sitting through The Virgin Queen (1955) and I was very impressed — Davis went from the Buckingham palace to an overcrowded apartment in New York with apparent ease.

Amazingly, The Catered Affair hasn’t dated one bit. Chayefsky’s family drama gets the essence of human aspirations and delusions. The Catered Affair was one of Bette Davis’s favorite roles (she called it “one of my proudest efforts as an actress”) —  it’s a little black and white movie with a big heart that merges keen observations about life with pathos and humor. B&W, 95 minutes, Not Rated.