After their ship sinks, two dozen survivors try to stay alive in a small lifeboat meant for nine people. The lifeboat’s Captain, played by Tyrone Power (The Black Swan), suddenly realizes that the numbers don’t add up so he starts throwing people off the boat.

Do the needs of the many outweigh the needs of the one? The question is put to the test here, but even Mr. Spock would have had problems with the film’s take on a cornerstone of logical thought. Abandon Ship is a harrowing thriller that asks impossibly difficult questions about humanity, ethics and self-preservation. 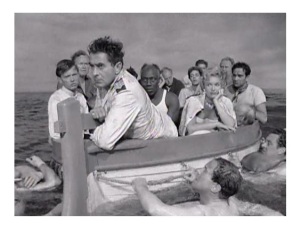 Tautly directed by Richard Sale (A Ticket to Tomahawk and Let’s Make It Legal), Abandon Ship (aka Seven Waves Away) presents a fascinating moral dilemma. The Captain coldly decides who should live and who should die in hopes to secure the survival of the majority. Does the end justify the means? Is the Captain’s brand of natural selection ethical? These questions are explored with brutal honesty.

Abandon Ship is set entirely in a lifeboat. The challenge was to create suspense out of a static scenario. Director Sale, who also wrote the fine screenplay, does a shockingly good job sustaining interest. From a technical standpoint, Abandon Ship is well put together. Camerawork, editing, sound design, visual effects, all technical elements contribute to create a believable, heart-wrenching drama. Characters are well-developed too — all characters are endowed with distinctive personalities. 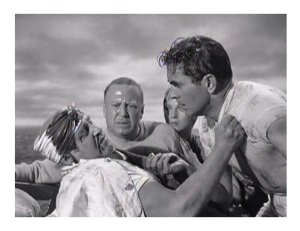 Tyrone Power, who also co-produced the movie, is dynamite as the ruthless Captain. He’s merciless yet oddly sympathetic. Power conveys superbly his character’s internal struggles. It’s too bad that he died not long after making the movie (he was only 44 years old!) because he had started to take on more challenging roles.

While not as cleverly directed as Alfred Hitchcock’s Lifeboat, Abandon Ship is interesting and suspenseful. The film resists passing any kind of judgment — viewers are asked to draw their own conclusions. Incredibly, the film was inspired by a real-life incident that occurred in the 19th century. The story was previously told in the 1937 film Souls at Sea. Remade in 1975. B&W, 97 minutes, Not Rated.