A woman (Mimsy Farmer, Four Flies on Grey Velvet) is sexually assaulted by two men from a hunting party. They all try to convince the rape victim not to say anything, but when she refuses, the hunters decide to “hunt” the lady.

A sort of feminist version of Richard Connell’s famous 1924 short story The Most Dangerous Game, or perhaps best described as a female version of John Boorman’s 1972 classic Deliverance, The Track (aka La Traque) isn’t your average thriller — this is a grim, no-holds-barred French suspense drama that operates at different levels. 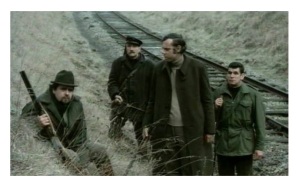 The concept of humans hunting humans is nothing new. Movies have revisited the topic again and again and again. The Track is among the best of its type. The film is a cautionary tale about the dangers of “group mentality” and a thorough examination of the “alpha male” theory. It also explores masculinity in contemporary society.

Because here “the prey” is played by a woman, a rape victim to boot, it’s impossible not to look at the film in the context of today’s endless sexual harassment scandals. Whether intentional or not (I suspect that it was done on purpose), The Track operates as an intriguing metaphor for gender inequality in modern society — thrills always work better when they are wrapped around complex moral issues. 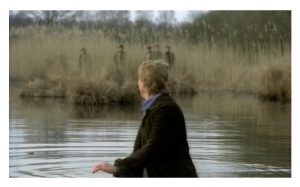 Although some twists are a bit hard to swallow, the movie kept me glued to the TV screen. Director Serge Leroy (Le Mataf) keeps things simple enough and concentrates on building tension. The ending will leave you speechless! Claude Renoir’s (The Spy Who Loved Me) muggy and colorless cinematography complements the film rather well.

Mimsy Farmer is simply fantastic as the movie’s ill-fated heroine who must fight to stay alive. It’s an emotionally and psychically demanding role that Farmer nails brilliantly. Michael Lonsdale (Moonraker) and Michel Constantin (The Inglorious Bastards) play the two main hunters. The rest of the cast is pretty good too.

The Track is at times hard to watch. It’s relentlessly bleak; what the movie says about humans isn’t pretty. But it’s an invaluable commentary on various kinds of social ills. The Track certainly gives viewers something to talk about. It’s also a darn good thriller. For fans of films like The Naked Prey, Turkey Shoot, Southern Comfort, Surviving The Game, and, of course, Deliverance. Color, 92 minutes, Rated R.