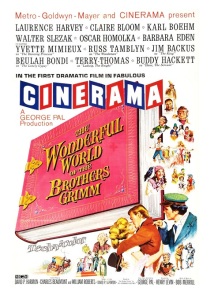 The true story of the Grimm Brothers, Wilhelm (Laurence Harvey, Room at the Top) and Jacob (Carl Boehm, Peeping Tom), who together wrote some of the best-known fairy tales. The real-life drama is interlaced with three of their tales.

After scoring critical and financial success with Tom Thumb (1958), an adaptation of the popular Grimm Brothers tale, producer George Pal apparently told himself, “If I can make a movie about one of the Grimms’ fairy tales, why not make one about the Grimms themselves?” To fulfill his dream, Pal pulled out all the stops — The Wonderful World of the Brothers Grimm was Pal’s biggest, costliest venture.

This is a HUGE production. It’s incredibly lavish. The Oscar-winning costumes, the opulent sets, the colorful stop motion animation, the bombastic music score, everything reeks of spectacle — we won’t see the likes of this kind of movie event again.

The film was shot in the now defunct Cinerama process, which consisted of three images projected onto a single screen. It’s impossible to fully appreciate this kind thing at home. Because the movie hasn’t been adequately restored, you can still see the lines that separate the cameras. It’s an annoying distraction, but it doesn’t ruin the experience.

The Wonderful World of the Brothers Grimm has a potpourri of cute songs. Nothing memorable, but all the tunes are perfectly suited for the movie. My favorite song was “Ah-Oom,” by Leigh Harline and His Orchestra. And Tamblyn and Mimieux have a really lovely gypsy dance, a must for both balletomanes and fans of musicals. The visual effects are imaginative and playful.

The Wonderful World of the Brothers Grimm is a nice family-oriented movie. The grand production does have a few drawbacks, namely the film’s excessive length. More important, the movie needs to be properly restored. The classic 1963 western How the West Was Won, another Cinerama movie, went through a lengthy restoration process and now looks like a brand new film. I hope someday this Pal production gets the same treatment. Color, 135 minutes, Rated G.

4 responses to “The Wonderful World of the Brothers Grimm (1962)”