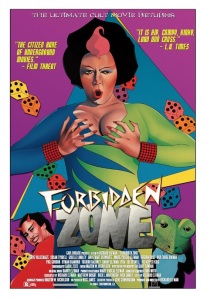 A suburban family discovers that the basement of their house contains a door that leads to the bizarre Sixth Dimension. After the family’s curious daughter, Frenchy Hercules (Marie-Pascale Elfman, Hot Tomorrows), falls through the door, members of the Hercules family, and Frenchy’s best friend Squeezit Henderson (Matthew Bright, Freeway), embark on a rescue mission.

“What’s a nice Jewish boy like you doing in the sixth dimension?”

Twisted, wickedly funny, irreverent musical for adults, the kind of thing that can’t be easily categorized. Deliberately cartoonish, Forbidden Zone is an outrageously subversive sing-along for people who claim to have seen everything — you don’t know whether to laugh, scream or run away in disgust.

The brainchild of Richard Elfman, who co-produced, co-wrote and directed the film, Forbidden Zone makes The Rocky Horror Picture Show look like a Disney movie. It has nudity, violence, sex, everything but the kitchen sink. If Elfman’s, the older brother of composer Danny Elfman (Beetlejuice), goal was to rattle the viewer with grotesque images and demented musical numbers, he succeeded all too well.

Elfman has acknowledged being influenced by The Jazz Culture, Max Fleischer’s cartoons and The Big Band Era of the ’40s. The cast is clearly having a blast. Hervé Villechaize (Tattoo in TV’s Fantasy Island) is King Fausto of the Sixth Dimension, the inimitable Susan Tyrrell (Fat City) is Queen Doris, Phil Gordon (Back Roads) is Flash Hercules, Jan Stuart Schwartz (The Incredible Shrinking Woman) is the Servant Frog and Joe Spinell (Rocky) is Squeezit’s Father — they’re all fantastic!

Mostly known for writing The Simpsons theme and his work for director Tim Burton (Beetlejuice and Batman), the younger Elfman wrote the film’s music score. He also plays “The Devil.” Elfman has a great singing voice, something he would later demonstrate as Jack’s singing voice in The Nightmare Before Christmas.

The young Elfman sings the title song (with The Mystic Knights of the Oingo Boingo). He also has the movie’s best musical number, “Squeezit The Moocher,” a hilarious adaptation of the popular 1931 jazz song “Minnie the Moocher.”  Old favorites like “Queen’s Revenge,” “Pico and Sepulveda” and “Alphabet Song” also get a strange make over.

Forbidden Zone is crude and offensive, but a lot of fun. I watched the color version. Originally shot in B&W, the film was later colorized under director Elfman’s supervision. It seems that Elfman wanted all along to artificially add color in order to create a specific look. In other words, the color version IS the director’s preferred version. The film’s animation was created by artist John Muto. Color, 74 minutes, Rated R.