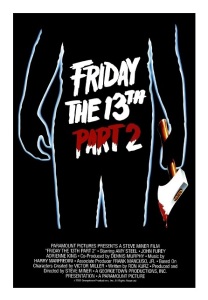 A young man (John Furey, Island Claws) opens “Packanack Lodge,” a training facility for camp counselors. There is only one problem: the camp is at a walking distance from the notorious Camp “Blood” Crystal Lake, where the infamous “Friday the 13th massacre” took place. Once again, a crazy old man (Walt Gorney, Day of the Animals) warns the counselors that they are in great danger, and once again they ignore the warnings.

As far as sequels go, this one is actually pretty good. Friday the 13th Part 2 is probably the best sequel of the highly successful Paramount series. It does have, however, an insanely ridiculous premise that negates the first movie. 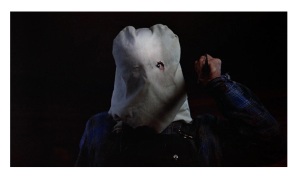 John Carpenter’s Halloween is often blamed for the “slasher craze” of the ’80s, but Friday the 13th is the film that put the craze in overdrive. Now it’s clear that no one expected Friday the 13th to do as well as it did — the ending doesn’t lend itself for a sequel. The finality of the ending put the filmmakers in a corner so Friday the 13th Part 2 makes little sense. Okay, let’s get this straight: in Friday the 13th, someone is avenging the death of Jason Voorhees yet the sequel tells us that he was living in the woods all this time and now Jason wants to avenge the death of his avenger (#%!?). Well, it is not as we are talking about William Shakespeare so everything is good, I guess.

Although I wish they had made a bigger effort to iron the wrinkles, Friday the 13th Part 2 is obviously technically superior to the original. Ron Kurz’s (Eyes of a Stranger) script is stubbornly derivative, shamelessly stealing from Bay of Blood (1971) and The Town That Dreaded Sundown (1976), but director Steve Miner’s (House and Halloween H20: 20 Years Later) stylish hand makes the ride smoother.

I liked Miner’s preference for long takes. Friday the 13th Part 2 has a fluidity that I enjoyed very much. Miner cuts as little as possible, which helps sustain the terror during the last 20-25 minutes. As I said before, Kurz’s script is the main problem here. Besides the annoying lack of continuity, the characters are nothing but cattle. People start dropping dead before you get to know them. Amy Steel’s (April Fool’s Day) “final girl” has not been giving enough time to win our sympathies so the whole thing comes across a bit (okay, a lot) mechanical.

Personally, I found Friday the 13th Part 2 scarier than its predecessor. I much prefer the hood (a pillow case?) to the more famous, iconic hockey mask. There is something very scary about a hooded assailant. The ending, while similar to the ending of Friday the 13th, is beautifully staged for maximum impact. The first time I watched it, I nearly fell off the couch! Multiple viewings haven’t diminished the spook factor.

Composer Harry Manfedini’s (Swamp Thing and The Hills Have Eyes Part II) main theme is still very creepy. Tom Savini’s (The Prowler, The Burning and Creepshow) old-school make-up effects are great too. I’m much prefer practical effects to CGIs — my eyes have never adapted to the softness of computer generated images.

Friday the 13th Part 2 not only introduced a new movie monster (Jason Voorhees), but also helped establish a successful franchise. That being said, one must get past its inconsistencies in order to enjoy the gruesome murder set-pieces. Flaws aside, I confess I enjoyed it immensely. You get what you paid for; a cheap, but fun carnival ride. With Adrienne King, Kirsten Baker, Bill Randolph, Ari Lehman, and Betsy Palmer as Mrs. Voorhees. Color, 86 minutes, Rated R.